This online publication offers the text of Apuleius' Metamorphoses, along with the acclaimed Groningen Commentary Series to this text, and an English translation. Additionally, the texts of Pro se de Magia and Florida are included as well as commentaries for both works by Vincent Hunink.
Apuleius of Madauros wrote his eleven books of the Metamorphoses (or The Golden Ass) in the late second century CE. It is the first fully extant specimen of an extended Latin work of prose fiction. It is written in a Latin which on the one hand shows elements of the everyday speech and of the colloquial language of the period, but on the other hand incorporates these elements in a sophisticated prose which bears the more general characteristics of an archaizing, artificial language. For the study of Latin prose art as well as of the development of everyday or colloquial Latin this work is an important monument, representative of the Latin prose art of the period. Apart from a purely philological and linguistic point of view, this text is equally important for the study of the development of Latin and European literature. Virtually lost during the Early Middle Ages, the Metamorphoses came to be known and imitated from the fourteenth century onwards, and has undoubtedly played an important role during the emergence of the novelistic literature of Western Europe.
The acclaimed Groningen commentary to the Metamorphoses was published as a multi-volume book series between 1977 and 2015 by the Groningen Commentaries on Apuleius group. It includes the text itself, a commentary and a translation. The complete series is now available online for the first time.
A commentary on Book III of the Metamorphoses is still missing from the online edition. Dr Leonardo Costantini is currently working on completing the work (forthcoming, 2022). In print, the Groningen commentary is also available as a set in the series Apuleius Madaurensis. 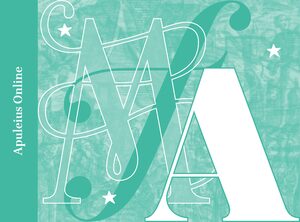