Published from Tokyo under Japanese editorship before, during, and after WWII (1932-1970), Contemporary Japan is now seen as a beacon of rationality, especially during the ‘devil’s decade’ of the 1930s. While consistently presenting the Japanese case, Contemporary Japan spoke from the shrinking middle ground of the public sphere. Run by the semi-official Foreign Affairs Association of Japan, Contemporary Japan published informed, critical, long-form journalism by leading Japanese and Western commentators on East Asia. Disillusioned Pan-Asianists compete with anti-Western rhetoric on the road to war against China. Post-war, new voices bemoan the 'reverse course' of 1947-1952. This lively Primary Source offers a window into Japan’s most rational and yet most engaged debates of the day. Contemporary Japan ceased publication in 1970 and Brill has secured the entire run from Vol.1 1932 to Vol. 29, 1970, (with considerable gaps from 1954-1970, see full list of issues) but limits this first series to the period 1932-1954. 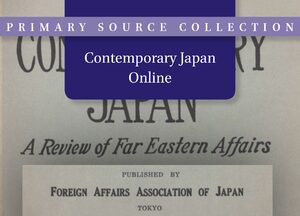