Huygens was a prominent Dutch mathematician, astronomer and physicist. He published major studies on mechanics and optics, and a pioneer work on games of chance. He is famous for his discovery of the rings of Saturn and its moon Titan, and for inventing the pendulum clock.

Shortly before his death in 1695 Huygens bequeathed a large part of his scholarly papers to Leiden University Library. After 1800, the legacy was further enriched by manuscripts and letters from family property, amongst others a large number of letters from Huygens' father Constantijn (1596 - 1687).

For over three centuries, many scholars have made the Codices Hugeniani the object of their research. The contents of the archive have been made partly accessible through the well-known Oeuvres complètes (a 19-volume 19th Century reference work). More recently, the Codices Hugeniani were described in detail by Dr. Joella Yoder in her Catalogue of the Manuscripts of Christiaan Huygens (Brill, 2013). With COHU the full archive's contents are now easily accessible for the first time.

Sections COHU is logically organized in the same way as the original archive, i.e. 52 codices as main entrances, enabling an overview of the archive as a whole.

Advanced search options In each codex the scans are offered in smaller groupings ranging from 1 to several dozen folios each. These groupings are all described with detailed metadata. This offers the possibility of an advanced search for specific topics, etc.

Rich metadata
For a large part the metadata are taken from Joella Yoder’s catalogue. This is the most authoritative overview and the outcome of 20+ years of hard work. The book contains valuable information about the archive that is not in the Leiden University Library's catalogue. 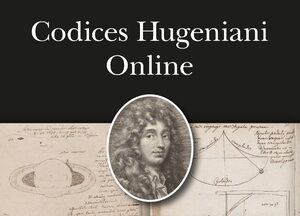