Here is a unique collection of rare documents relating to the Japanese occupation of Korea, from the late nineteenth century up to 1945, representing a highly significant period in Korean history, and vital for a true understanding of many reflexes in the Koreas today. In 1876, Japan “opened” Korea to outside contact for the first time. What followed was a period of sparring with the Chinese over the right of influence in Korea, a rivalry which culminated in the Sino- Japanese war of 1894-95. Following victory, Japan steadily increased its presence and interference in Korean matters until the outright annexation of the country in 1910. Korea would remain a Japanese colony until the end of the Pacific War in 1945. Drawn from the holdings of the C.V. Starr East Asian Library at Columbia University, New York, the collection includes more than 62,000 pages in Japanese language, 18,000 pages of Western (in most cases English) early impressions of Korea, and Korean texts (16,000 pages). This true treasure-trove, preserved through our online service, now presents the texts conveniently on your desktop. 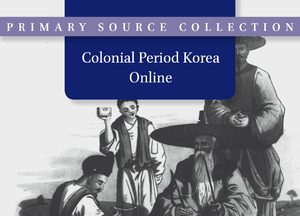