The Codices Vossiani Graeci et Miscellanei Online publishes the 174 manuscripts in Greek, and the 42 manuscripts containing both Latin and Greek, from the world-famous Isaac Vossius manuscript collection at Leiden University Library. Isaac Vossius (1618-1689) was a classical philologist and collector of manuscripts, maps, atlases and printed works; he had a particular interest in Greek manuscripts; his first publication was an edition of a Greek manuscript, and he taught Greek to Queen Christina I of Sweden during his time working at her court.

This primary source collection offers, in total, 216 manuscripts comprising 27,205 leaves, giving a total number of images (including covers, spines, and fly-leaves) of c. 55,409. K. A. de Meyier’s Latin-language catalogue of the collection is available in digital format alongside the scanned manuscripts, providing users with essential information on the content, context, and physical appearance of each codex; an English-language summarised and updated version of the catalogue is also provided for each manuscript, including new and recent bibliographical references. 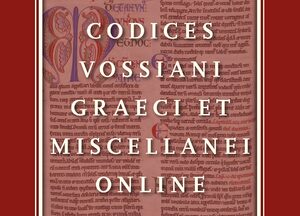