The Codices Vossiani Latini Online publishes all 363 codices which form the world-famous Latin part of Isaac Vossius’ manuscript collection held at Leiden University Library. The Codices Vossiani Latini count a large number of early medieval manuscripts (a whopping 76 Carolingian manuscripts dating from before 900), including major sources of many classic texts. Famous are the oldest sources of Lucretius’ De natura rerum, of Cicero’s philosophical works, and the earliest manuscript of Plinius’ Historia naturalis known to be produced north of the Alps (Northumbria, eighth century). Other highlights include an illustrated herbal from around 600 and the Aratea, an astronomical treatise from around 840, manufactured at the court of Louis the Pious with 39 beautiful miniatures of the constellations. A large part of the research done by foreign scholars on Western manuscripts at Leiden University Library focuses on the Vossiani Latini.

Isaac Vossius (1618-1689) was a classical philologist and collector of manuscripts, maps, atlases and printed works. Vossius was born in 1618 as the son of the humanist Gerard Johannes Vossius (1577-1649). In 1648, Isaac started to work as a scholar for Queen Christina of Sweden. After he had sold the famous library of his father to Christina in 1649, Vossius was appointed court librarian a year later, with the task of expanding and cataloguing the library. After a stay of eighteen months in the Republic, partly forced, Vossius returned to Sweden in 1653, where he found his own book collection and the court library in great disarray. When Christina abdicated in 1654, a large part of her library was shipped to Rome. A part of the manuscripts and printed books was, however, taken from Christina’s library by Vossius as compensation for late payments, and for the loss of his own books. At the end of his life Vossius bequeathed his library to the children of his brother Matthaeus.

When negotiations with Oxford University had come to nothing, the heirs accepted an offer from the curators in 1690 to buy the collection for 33,000 guilders on behalf of Leiden University Library. The purchase of the Vossius library caused financial difficulties for Leiden University, but to its library it brought international fame. Especially the manuscripts proved to be of invaluable worth. The purchase of the Vossius library doubled the collection of Leiden University to c. 9,500 books. Doubles were removed from the printed books and these were auctioned in 1706. After ex libris slips had been attached to all title pages, the books were distributed over the existing collection which was grouped according to size and to subject. The manuscripts from Vossius (over 700 items) were always kept separately.

The manuscript collection is enriched by detailed information drawn from by K. A. de Meyier's catalogues of the codices, providing users, both students and researchers, with essential information on the content, context, and physical appearance of each codex. 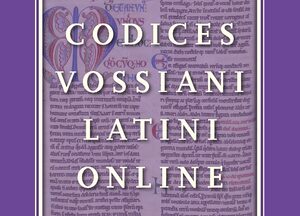 A thumbnail page-overview, for example in Acrobat Reader, gives the folio information below the thumbnail of the corresponding page.