Editor: Matthew M. Aid
This unique collection of well over 2,300 formerly classified U.S. government documents (most of them classified Top Secret or higher) provides readers for the first time with the documentary record of the successes and failures of the U.S. intelligence community in its efforts to spy on the Soviet Union during the Cold War. This document collection covers the period from the end of World War II in 1945 until the collapse of the Soviet Union in 1991, but also includes a number of formerly classified historical reports and articles written by U.S. intelligence historians since the end of the Cold War.

CIA Parachute Drops Inside the USSR
This collection contains thousands of pages of previously unpublished intelligence reports, including for the first time declassified documents concerning the abortive attempts by the Central Intelligence Agency (CIA) to parachute agents into the USSR between 1949 and 1954; new details of dozens of previously classified aerial reconnaissance overflights of the Soviet Union conducted by U.S. aircraft between 1949 and 1960; dozens of formerly Top Secret documents concerning Soviet attacks on U.S. military and civilian aircraft between 1945 and 1983; and over fifty formerly secret CIA intelligence estimates on the Soviet Union covering a wide range of topics ranging from Soviet military capabilities to the Kremlin’s domestic and economic policies.

Thirty years of research
This documentary collection, obtained over the course of thirty years of research at the U.S. National Archives in Washington, D.C. and other archival repositories, is essential reading for students and researchers seeking to better understand how secret intelligence informed and shaped U.S. and NATO defense and foreign policy towards the Soviet Union during the Cold War. 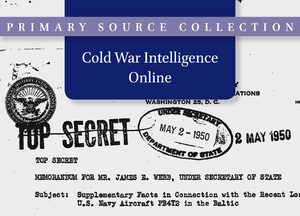 EUR  €4,229.00USD  $4,961.00
Contact Sales
Cold War historians, intelligence historians, graduate and undergraduate students of modern history, and researchers working on international relations and security.
Matthew M. Aid is a leading expert on intelligence matters. He is the author of The Secret Sentry, the definitive history of the National Security Agency, and Intel Wars, the history of the U.S. intelligence community during the administration of President Barack Obama. He lives in Washington, D.C.
"Matthew Aid has invented a new way of coming to grips with the successes and failures of the Cold War – through a careful and critical review of the American and Soviet efforts to spy on each other. This collection of heretofore secret documents should be seen as history in real time – a series of surprisingly objective assessments and analyses of what went right and, all too often, what went wrong as American and the Soviet Union struggled for supremacy in the aftermath of World War II." – Seymour M. Hersh, Washington, D.C.