Dutch-Catholic Immigration to the Americas Online

Henk van Stekelenburg (1929-1999) was a prominent Dutch historian who worked mostly on Catholic emigration from the Dutch region of North Brabant to North America. This collection includes his manuscripts and detailed descriptions of the most relevant archival materials that he consulted. It also offers personal correspondence, research notes, interviews, bibliographical references, genealogical information, immigration records, and illustrations about Dutch-Catholic immigration to the US and Canada from 1820 to 1960.

The uniqueness of this collection stems from van Stekelenburg’s focus on the individual motivations that induced Dutch people to migrate, his attention to the social composition of Dutch emigrants, to the political reaction of their governments, and to the many organizations that helped them settle in the New World. This collection, indeed, brings in the voices and perspectives of non-state agents and provides further examples of the non-linear processes of assimilation that Dutch migrants had to go through in North America.

Finally, the documents of this collection reveal the emphasis on cultural propaganda, conceived as an effective means to spread a certain range of ideas among a large and well-defined target audience, that characterized the phenomenon of Dutch-Catholic emigration. In doing so, this collection opens the field to further inter- and multi-disciplinary studies on the ways in which Dutch popular media, including radio, the press, and cinema, introduced and framed the numerous possibilities of overseas migration. 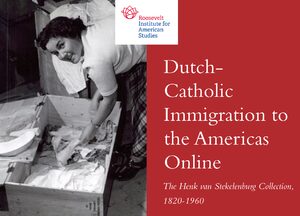 Project Adviser
Dario Fazzi, Roosevelt Institute for American Studies
Scholars and students of cultural and public diplomacy, political and economic relations, migration flows, cross-cultural exchanges, the role of religion in foreign policy making, and American political, cultural, and economic hegemony in Europe.
Project adviser Dario Fazzi is Research Fellow at the Roosevelt Institute for American Studies. His main field of study is US and Cold War history, with a particular focus on public diplomacy and transnational movements. His works and reviews on nuclear cultures, peace movements, youth protests, and transatlantic crossings have appeared in peer-reviewed journals, international collections, and edited volumes. He is the author of Eleanor Roosevelt and the Anti-Nuclear Movement: The Voice of Conscience, a systematic account of the former first lady and UN representative’s involvement in the first ban-the-bomb campaign of the Cold War. Dr. Fazzi teaches history courses at several Dutch universities, where he lectures on the US, the Cold War, and transatlantic relations. He is also project assistant for Leiden University’s Massive Open Online Course The Rooseveltian Century (Coursera).