The Encyclopedia of Christianity Online

Editor: John Mbiti
This online encyclopedia describes modern-day Christian beliefs and communities in the context of 2000 years of apostolic tradition and Christian history. Based on the third, revised edition of the critically acclaimed German work Evangelisches Kirchenlexikon, this comprehensive and up-to-date encyclopedia includes all 5 volumes of the print edition of 1999-2008. It has become a standard reference work for the study of Christianity past and present.

Comprehensive, up-to-date, reflecting the highest standards in scholarship yet intended for a wide range of readers, the Encyclopedia also looks outward beyond Christianity, considering other world religions and philosophies as it paints the overall religious and sociocultural picture in which the Christianity finds itself.

Describing Christianity in its global context, the Encyclopedia is a fully international work, with articles written by scholars from many countries and cultural backgrounds. Separate articles for every continent and for over 170 countries present both the history and the current situation of the Christian faith in all its rich spiritual and theological diversity around the world.

Features and benefits:
- Comprehensive, authoritative, up to date
- Both historical and contemporary in scope
- Scholarly yet accessible to general readers
- More than 1,700 articles
- Based on the original five volume print edition
- Global context, separate articles for every continent and for over 170 countries

Encyclopedia of Christianity Online is also available in print. 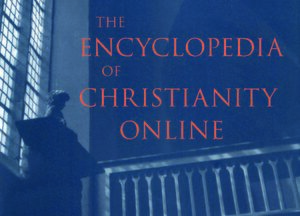