As flagship pictorial organs of Japan’s Greater East Asia Co-Prosperity Sphere The Japan Times Weekly (November 1938 – December 1942) and its successor Nippon Times Weekly, were priceless investments in the expression of Japan’s master narrative (i.a., the victimization of China and Southeast Asia by Western interests) and therefore published in colour at a time of extreme newsprint shortages. As an optional, limited giveaway with the main newspaper Japan (Nippon) Times, these weeklies are now extraordinarily rare. This Primary Source from Brill therefore focuses on the wartime holdings, 1938-1944, of these consecutive titles showcasing Japan’s martial and geopolitical achievements in the all-out war in China and then in the Pacific War. Of the seven years of the wartime holdings, this Primary Source offers almost five years of the total.

Completeness: Of the Japan Times Weekly, this Primary Source runs from the 2nd issue (September 1938) to November 1942, close to the end of the title. The Nippon Times Weekly runs from the first issue of 1st January 1943 to the end of January 1944. Should any further issues emerge after all, these will be added to this PSO at no extra cost to customers. In addition to the Weekly magazine, both the parent newspapers the Japan Times and its 1943 successor the Nippon Times established publishing arms bringing out books and booklets broadcasting the defining mission of the Daily and the Weekly editions. Brill has collected a good holding of these issues, which we will publish with this Primary Source with its own dedicated tab. Also in addition, the material here comes with useful Index issues and extremely rare Supplements, including the Nippon Times Supplement: News and View of Greater East Asia. Some issues of this consecutive title are available elsewhere in scattered form, but none are available in such a full run, and none have been digitised in full-text-searchable format 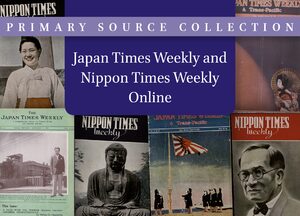