The English-language Japan Chronicle Weekly (1900–1940) is the newspaper of record for Japan’s engagement with modernity and its emergence, through war, political and social upheaval and seismic social change in East Asia, onto the world stage in the first half of the twentieth century. Historians of East Asia have long seen the Japan Chronicle as a uniquely valuable resource. This well-informed, controversial but always readable source of news and opinion on Japan and East Asia offers an intriguing and lively Japanese complement to the North China Herald Online.
This collection includes the Kobe Weekly Chronicle (1900-1901), the predecessor of the Japan Chronicle Weekly.

Founded and based in Kobe, a port city that saw enormous expansion during the Chronicle’s lifetime, and edited by representative figures in this treaty port, the Chronicle provides a unique perspective not only on the settler communities in Japan and East Asia but also to the historical development of East Asia as it happened.
This supremely important and uniquely valuable resource, covering the years 1900-1941, is now exclusively available in Brill’s East Asia Archive Online, with the weekly Commercial Supplement. 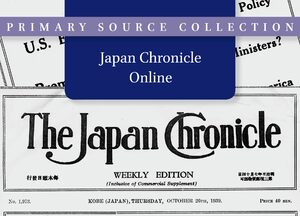 Advisor: Peter O’Connor, Musashino University, Tokyo
"[...] Brill’s decision to re-issue the Chronicle online is to be welcomed: it will assist research in documenting Japan’s spectacular growth in those fifty years as well as illustrate the financial constraints which the non-Japanese press faced and the controversies in which they became engaged." - Ian Nish, London School of Economics and Political Science
"It is hard to imagine a more useful source for English-language students of Japan during the half century before World War II, when the British-oriented Japan Chronicle served as arguably the leading purveyor of English-language news about that country. Standing quite tenaciously aloof from the official positions of both Japan and Great Britain (until the late 1930s), the Chronicle made available not only the news but much of the most incisive and articulate opinions of the expatriate community." - James L. Huffman, Witternberg University