Lexicon of Greek Grammarians of Antiquity

Editors: Franco Montanari, Fausto Montana and Lara Pagani
Grammarians of antiquity taught and practiced philology, text criticism and rhetoric, essential skills in the education, career and public life of ancient Greeks and Romans. Brill’s Lexicon of Greek Grammarians of Antiquity (LGGA) serves as the first point of reference for information on these ancient grammarians for scholars of Greek and Latin antiquity, in particular for research into the history of philology, grammar and ancient scholarship.
Sorted alphabetically by Latin name, each entry consists of 1) an introduction with biographical information on the respective grammarian, as well as a discussion of his work and preserved fragments; 2) the Greek text of these fragments; and finally 3) the relevant bibliography, including lists of editions (if any) and studies. A total of more than 570 grammarians have been identified for inclusion in the LGGA and over 300 are currently available online. Each entry will be published in Italian and English. Completion of the Lexicon is expected at the end of 2023. 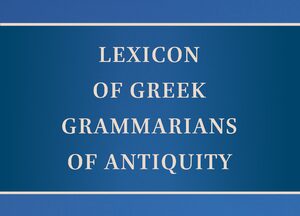 EUR  €3,640.00USD  $4,441.00
More Options
(Prices excl.Tax )
Contact Sales
Contact Sales
Fausto Montana is Professor of Ancient Greek Literature at the University of Pavia (Italy). He is a member of national and international scientific institutions and participates in various research projects in the field of classics. His most recent works include critical commented editions of ancient exegesis preserved in papyri (on Aristophanes, 2012, and Herodotus, 2018), the edited volume The Birth of Scholiography. From Types to Texts (with Antonietta Porro, 2014) and the chapter Hellenistic Scholarship in the Brill’s Companion to Ancient Greek Scholarship (2015).

Franco Montanari is Professor of Ancient Greek Literature at the University of Genoa (Italy), Director of the Rivista di Filologia e di Istruzione Classica, of the Centro Italiano dell' Année Philologique and of the Aristarchus project online, and a member of numerous international research centers and associations. Apart from the Vocabolario della Lingua Greca he has published many other scientific works on ancient scholarship and grammar, archaic Greek epic poets and other Greek poets of the Classical and Hellenistic periods, including Brill’s Companion to Hesiod (2009) and Brill’s Companion to Ancient Greek Scholarship (2015).

Lara Pagani is Associate Professor of Ancient Greek Literature at the University of Genova (Italy). Her main interests concern ancient Greek scholarship and grammar, Homeric studies, Greek lexicography and the reflection on language in ancient Greece, literary papyrology. She is a member of research teams active in the field of classics. Among her most recent publications there are the chapter The Language Criteria (Hellenismos) and its Criteria in the Brill’s Companion to Ancient Greek Scholarship (2015), and the article The Iliad “Textscholien” in the Venetus A, in the volume that she co-edited Approaches to Greek poetry. Homer, Hesiod, Pindar, and Aeschylus in ancient exegesis (2018).