Brill’s Digital Library of World War I is an online resource that contains over 650 encyclopedia entries plus 250 peer-reviewed articles of transnational and global historical perspectives on significant topics of World War I. This collection includes Brill’s Encyclopedia of the First World War, an unrivalled reference work that showcases the knowledge of experts from 15 countries and offers 26 substantial themed essays on the major belligerents, society and culture, diplomatic and military events, and the historiography of the Great War.

The 250 articles address not only the key issues from political, historical and cultural perspectives, but also engage with aspects of the war which have remained underexplored such as the neutrals, the role of women, and memory. The chapters have been drawn from a select number of Brill publications that have been published in the last 15 years.
Brill’s Digital Library of World War I is a unique digital library offering a range of resources enhanced with navigational tools, and will allow researchers to discover new perspectives and connections.

Features and Benefits
- First online presentation of Brill's Encyclopedia of the First World War, an unrivalled historical source and reference work for the Great War, offering themed essays in combination with 650+ shorter entries.
- 250 peer-reviewed book chapters published in the last fifteen years.
- Users can browse the database via an expandable listing, alphabetically, or via the search bar.
- Users can also search by keyword, with each encyclopedia entry and book chapter assigned keywords (keyword list adopted from the International Society for First World War Studies).
- Entries and chapters can be downloaded, printed, and exported. 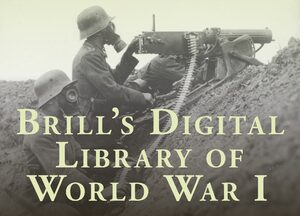 EUR  €4,027.00USD  $4,724.00
Contact Sales
Brill's Digital Library of World War I offers a combination of introductory, accessible material with recent, important, and high-level scholarship, and is therefore ideal both for students/newcomers, and for scholars. Anyone interested in twentieth-century military history and war studies; international relations, law, and diplomacy; and twenthieth-century social and economic history will enjoy diving into this extensive online collection.
Review of the print edition of Brill's Encyclopedia of the First World War '...an important new reference on the Great War which throws interesting light on facets of the conflict that are often overlooked...' A. A. Nofi, in The NYMAS Review, 57 (2014), 13. Reviews in English of the German print edition of the encyclopedia 'The efforts of Gerhard Hirschfeld, Gerd Krumeich, Irina Renz, and Markus Pöhlmann to come up with an encyclopedia of the First World War must therefore be warmly welcomed, as the editors give an excellent overview of all relevant fields of research. The encyclopedia, which consists of a series of introductory essays, a dictionary of terms, and a short index, contains, however, much more than just an overview of the most recent findings on the First World War… The encyclopedia does not want to be just a reference book for the First World War. For its editors it is equally important that the different fields of research on the war that have drifted apart in recent years are brought back together. For them the different methods of research can yield beneficial results only if communication between the different fields of research remains intact, and the national and cultural barriers between researchers from different countries, which the editors still believe to be rather high, are overcome. Therefore the encyclopedia contains a series of introductory essays on the major belligerent countries, on society in war, on the course of the war, on the laws of war as well as the end of the war, and on the historiography of the war…The editors have to be thanked for their great work, which will for a long time be the first that a student will consult in order to get a thorough introduction to the First World War.' Daniel Marc Segesser, in War in History, 13 (2006), 405-6 'The publication of the German-language Encyclopaedia of the First World Warrepresents a major scholarly achievement. Richly illustrated with first-class maps and previously unpublished photos and propaganda material (from the archives of the Bibliothek für Zeitgeschichte in Stuttgart)… The dictionary in particular is a treasure trove. It provides solid information on international relations, domestic politics, military technology, and wartime propaganda as well as unexpected insights into aspects such as soldiers' humour or the nailing up of "war landmarks" at the home front. The selection of topics is by and large balanced… The new encyclopaedia is particularly strong on aspects an earlier generation of military historians would have considered trivial or irrelevant… the cultural and social history of front and home front. The Enzyklopädie Erster Weltkrieg illustrates the paradigm shift that has occurred in military history over the last two decades… the encyclopaedia also showcases the research undertaken by many internationally recognised historians. The list of contributors reads like the latest Who's Who of military history… What truly distinguishes the German encyclopaedia from similar volumes is its international scope.' Stefan Goebel, in The Journal of Military History, 69 (2005), 592-3 '...an excellent compendium of current scholarship and an invaluable tool for those interested in the multifaceted history of World War I and the broad sweep of the new military history.' Joe Perry, in German Studies Review, 29 (2006), 184-5