The Manchuria Collection offers scholars of Japan’s modern history an unparalleled inside view of Japan’s agenda in Manchuria and its plans for domination in Asia. Founded in 1908 in the wake of Japan’s victory in the war against Russia, the Manchuria Daily News set up in Dalian (Darien) at the headquarters of the South Manchuria Railway Company (Minami Manshū Tetsudō Kabushiki-gaisha) (SMR).
Lavishly funded from Tokyo, and with the full resources of the SMR Research Department behind them, the Manchuria Daily News and the associated titles offered here constitute a formidable record of Japanese policy on Manchuria and the Manchoukuo project. From 1908-1940 this compact, feisty daily and its associated titles responded to the exigencies of the day, taking requests from a variety of official and often competing propaganda bureaux. In the Manchuria Daily News and in these associated publications, the SMR presented a powerful case for the Japanese leadership of Asia, after 1932 using Manchoukuo as a showcase for Japan’s technological, cultural and political advancement.
Apart from the early 1908-1912 holdings, and the October 1919 to February 1921 gap when publication was suspended , the 1912-1940 run published here is virtually complete and exclusive to Brill Primary Sources Online.
Brill has sourced an exciting range of associated English-language magazines published in tandem with the Manchuria Daily News. Here for the first time are extensive holdings from the irregular publications Manchuria Magazine, Manchuria Month, Contemporary Manchuria and the Manchuria Information Bulletin. 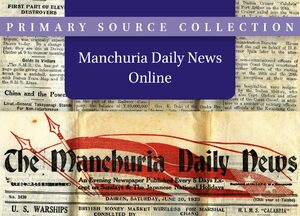 Advisor: Peter O’Connor, Musashino University, Tokyo
' Manchuria Daily News' is the single most comprehensive source for information on Manchuria (Manchukuo) in the first half of the twentieth century. Compiled under supervision of the Japanese colonial authorities, it was the paper of record for the region. The periodic supplements issued by the paper and available as part of this collection, are a special bonus for scholars. And it’s all in English! Ronald Suleski Suffolk University, Boston, MA