The English-language North China Herald is the prime printed source in any language for the history of the foreign presence in China from around 1850 to 1940s. During this so-called ‘treaty century’ (1842-1943) the Western Powers established a strong presence in China through their protected enclaves in major cities. It was published weekly in Shanghai, at the heart of China’s encounter with the Euro-American world in a city at the forefront of developments in Chinese politics, culture, education and the economy. As the official journal for British consular notifications, and announcements of the Shanghai Municipal Council, it is the first -- and sometimes only -- point of reference for information and comment on a range of foreign and Chinese activities. Regularly it also features translations of Chinese official notifications and news.

The Herald had correspondents across the whole of China. These supplied a constant stream of news on an extensive range of topics, as well as news and gossip, such as, -- apart from news and gossip reflecting the social, cultural and political life of the foreign settlements--, trade statistics, stock prices, Chinese news, essays on Chinese culture and language, law reports from foreign courts in the settlements, company reports, news on foreign social, cultural and political life, maps, cartoons, photographs, stock prices and law and company reports, advertisements, tables of tea, silk and cotton exports, or long-forgotten facts about missionaries, birth, marriage, and death announcements. Its coverage extends well beyond British communities, and includes other foreign nationals - the French, Danish, Italian, German, Dutch…, etc., etc.

Although a thriving treaty port press developed over the century of the foreign presence, no other newspaper existed over such an extended period, and covers it in such incredible depth and variety. The dense unindexed columns of the Herald offer therefore an indispensable, still largely unexplored treasure-trove for any scholar of modern Chinese history.

War, revolution and politics have conspired to destroy library holdings or frustrate access to publications from China’s treaty century. The fully text-searchable North China Herald Online will be one of the primary resources on a period which continues to shape much of China’s world and worldview. 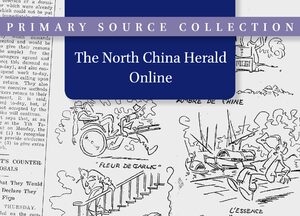