In Japan’s network of newspapers presenting the national case for expansion and leadership in Asia, the North China Standard (in Chinese, Huabei zheng bao) stands alongside the Japan Times & Mail as a real newspaper, distributing real news written by real journalists. Derided as a propaganda rag when it first began publication in December 1919, the Standard read better, and investigated and reported better quality news to a steadily growing readership in post-WW1 China and Japan. It was also a representative newspaper chosen for international conferences and delivered gratis to all delegates.

The North China Standard was founded in December 1919 by John Russell Kennedy (1861-1928), Anglo-Irish master architect of Japan’s modern propaganda programmes. Its most immediate functions, in the wake of propaganda failures at the Paris Conference and the Treaty of Versailles granting Japan continuing rights in Shandong Province, was to argue Japan’s claim to special rights and advisory powers in Chinese affairs, to question the ability of the Chinese to govern China, and to maintain British support for the Anglo-Japanese Alliance. Throughout the 1920s it served as one of Japan’s representative newspapers at international conferences, delivered gratis to all delegates.

Sticking to Japan’s propaganda mission would have made for a dull read, and the Standard made a slow start under Satoh Kenri, (known as Henry), in 1919. However, the paper improved under the British journalist, John S. Willes in the 1920s. It took the gifted and imaginative Liverpudlian (1888-1956) George Gorman to turn the North China Standard around and make it into a real newspaper. Both Satoh and Gorman were seasoned publicists in the cause of Japan. However, Gorman’s long experience in this role convinced him that the best way to advance Japan’s cause was through polemic and debate. Under Gorman, the North China Standard served Chinese and foreign readerships intelligently and conscientiously, making this title a valuable primary source for scholars of Japan and China. 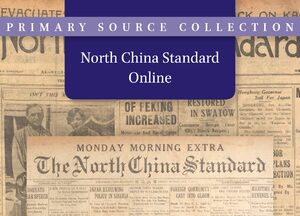 Advisor: Peter O’Connor, Musashino University, Tokyo
"The North China Standard (1919–1930) is a crucially important source of insights into Sino-Japanese relations during the 1920s. A ‘semi-official’ organ of the Japanese Ministry of Foreign Affairs, the Standard was one of the key English-language newspapers published in Beijing. Established by the Japanese government to regain amity with the Anglo-American powers after WWI, the paper was intended to counter negative public opinion towards the Japanese in Beijing and Tianjin, and to influence Chinese politics. [..] The North China Standard opens a window to fresh understandings of the relationship between Japanese journalists and their government, tensions and rivalries between the Japanese government and its military, and connections between the press and diplomatic circles. [..] The Standard reflects Japan’s first major foray into China’s fiercely competitive English-language news market and information networks, jostling with interest groups from Britain, the United States, the Soviet Union and China itself. Thus the North China Standard is an important research source for scholars of Chinese and Japanese history and East Asian media researching the environment of multi-power struggle in the region during the 1920s." - Shuge Wei, PhD., School of Culture, History and Language, The Australian National University