Prize Papers Online 1 contains approximately 7,000 interrogations of members of the crew of ships taken during the American Revolutionary War and Fourth Anglo-Dutch War (ca. 1775-1784). It shows images of each interrogation (of two, three, sometimes even six or more pages). Answers to the fourteen most researched questions are transcribed and stored in a searchable database.

The American Revolutionary War (1775–1783), began as a war between the Kingdom of Great Britain and the Thirteen Colonies, but gradually grew into a war between Britain on one side and the newly formed United States, France, and its allies the Dutch Republic, and Spain, on the other. The Fourth Anglo-Dutch War (1780–1784) was a conflict between the Kingdom of Great Britain and the Dutch Republic. The war, tangentially related to the American Revolutionary War, broke out over British and Dutch disagreements on the legality and conduct of Dutch trade with Britain's enemies in that war. 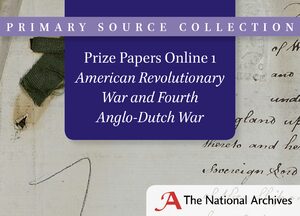