Prize Papers Online 2 contains approximately 6,000 interrogations of members of the crew of ships taken during the War of the Austrian Succession and Seven Years’ War (ca. 1739-1763). It shows images of each interrogation (of two, three, sometimes even six or more pages). Answers to the fourteen most researched questions are transcribed and stored in a searchable database.

The War of the Austrian Succession (1740-1748) involved most of the powers of Europe over the question of Maria Theresa's succession to the realms of the House of Habsburg. The Seven Years' War took place between 1754 and 1763 with the main conflict being in the seven-year period 1756–1763. It involved most of the great powers of the time and was driven by the antagonism resulting from overlapping interests in colonial and trade empires, and from territorial and hegemonial conflicts in the Holy Roman Empire. 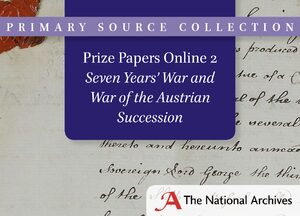