In this collection Russian views are represented by such publications as no. 685 by Anatole Demidov (1812-1870), traveler and patron of the arts; the discussion on the peace by former diplomat Tchihatchef; and the accounts of the Russian veteran, Piotr Andreevich Viazemsky (1792-1878). The opinions of two Turkish officers, Rustem Effendi and Seid Bey, and the views on the Crimean War of the Algerian poet, Muhammad b. Ismail (1820-1870) are also included. On the British side the influential works of the virulently anti-Russian diplomat, David Urquhart (1805-1877), are well-represented, as well as more moderate publications. 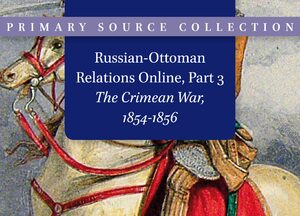