The present collection, World Council of Churches: Relations with the Roman Catholic Church, makes available a section of the ecumenical archives covering the period 1948-1992. These archives are of great interest and frequently consulted by researchers working on the history of the ecumenical movement. The different sections contain, among others, correspondence with Pope Paul VI, Pope John Paul II, Cardinal Bea and the Community of Taizé.
A few examples of cooperation between WCC and RCC are: jointly sponsored studies on “common witness and proselytism”, “catholicity and apostolicity”, “towards a confession of the common faith”; Roman Catholic membership in the Commission on Faith and Order; the setting up by the RCC of consultative relations with the Commission on world Mission and Evangelism and the Christian Medical Commission; the joint preparation of material for use in the Annual Week of Prayer for Christian Unity; the concern for development and peace by the joint Committee on Society, Development and Peace (SODEPAX); the full participation of the RCC in regional, national and local councils of churches.
Examples of ecumenical collaboration are: the various bilateral agreements on doctrinal points; the interconfessional translation of the Bible under the joint inspiration and guidance of the United Bible Societies and the World Catholic Federation for the Biblical Apostolate; the development and the understanding of the notion of the unity of the church in terms of conciliar fellowship; the exploration of the possibility of membership for the RCC in the WCC. 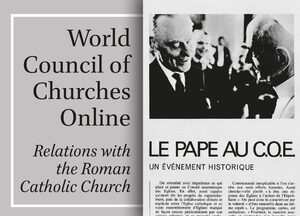