On the Borders of Law, History and Politics: Estonian Statesman Jüri Jaakson’s Views and Life in Context

Focusing on the life and work of the Estonian politician and Statesman Jüri Jaakson (1870–1942), the article gives an overview of the changing historical and social context that has influenced the formation of Estonian law. Estonia’s historical diversity can be regarded as events of transformation and disruption that have resulted in vague concepts.

The article consists of three interrelated parts, taking into account that law and society are interconnected and that politics is constructed through language. The first part builds on Jüri Jaakson’s presentation at the first Estonian Lawyers’ Days in 1922, and shows how historical events have influenced political and legal conceptualisation. The second part shows how Jüri Jaakson’s own biography tragically reflects the changing Estonian historical context that he himself considered diverse and controversial. Finally, in the third part, some normative assertions have been made in an attempt to show that any legal term always relates to a certain social and political context.

Although the author’s aim has not been to frame a doctrine or provide instruction, but rather, with the help of Jüri Jaakson’s thoughts situated in the context of his time, to offer a moral measure for understanding the developments that could influence small states, it offers a measure for understanding why societies require (new) conceptualisation and re-conceptualisation. Conceptualisation is understood as constructing something new that we cannot identify in the past, while reconceptualisation is understood as change, also resulting from discontinuity and/or interruption. Because there are no unchangeable social categories or meanings, continuity can at best mean a situation where the research objects have remained more static over a concrete period.

Methodologically this article is an attempt to connect legal research with a conceptual historical approach. 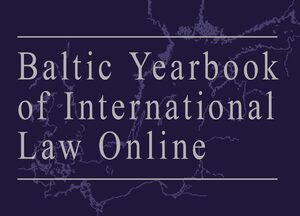