The larval phase of metazoans can be interpreted as a discrete post-embryonic period. Larvae have been usually considered to be small, yet some metazoans possess unusually large larvae, or giant larvae. Here, we report a possible case of such a giant larva from the Upper Jurassic Solnhofen Lithographic limestones (150 million years old, southern Germany), most likely representing an immature cirripede crustacean (barnacles and their relatives). The single specimen was documented with up-to-date imaging methods (macro-photography, stereo-photography, fluorescence photography, composite imaging) and compared with modern cirripede larvae. The identification is based on two conspicuous spine-like extensions in the anterior region of the specimen strongly resembling the so-called fronto-lateral horns, structures exclusively known from cirripede nauplius larvae. Notably, at 5 mm in length the specimen is unusually large for a cirripede nauplius. We therefore consider it to be a giant larva and discuss possible ecological and physiological mechanisms leading to the appearance of giant larvae in other lineages. Further findings of fossil larvae and especially nauplii might give new insights into larval evolution and plankton composition in the past. 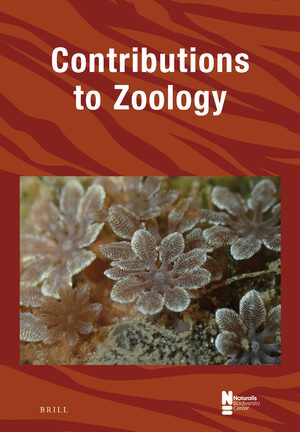