A cationic dye which binds acidic polymers such as pectin and monoclonal antibodies, directed against un-esterified and methyl-esterified (JIM5) and only methyl-esterified (JIM7) pectin epitopes, were used, in conjunction with light microscopy, confocal microscopy and immunogold electron microscopy, to study the spatial distribution of pectin in the xylem tissue of Pinus radiata D. Don. Histochemistry demonstrated that pectin was located in the compound middle lamella (CML) of the maturing tracheid cell wall, in addition to the pit membranes and the CML of the ray cell walls. Immunogold labeling showed differential distribution of the pectin epitopes within the CML of the maturing cell walls. Moreover, in the xylem, the JIM5 and JIM7 epitopes were found to be restricted to distinct tissues. Neither epitope occurred in the secondary walls of the xylem cells. These patterns of epitope expression were not maintained in the mature cell. These results represent the first demonstration of restricted spatial patterns of distribution of these epitopes in the xylem tissue of radiata pine and are consistent with results from other coniferous gymnosperms. 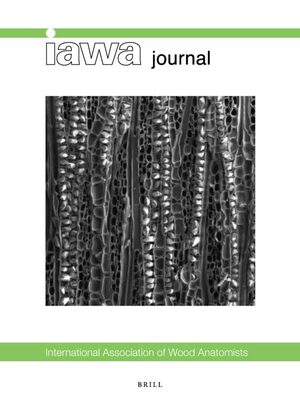