Freedom of Association, Majoritarianism, and the Rights of Minority Unions

In 2013, the Chamber of Mines, the central organization of employers in South Africa’s mining sector, signed a collective agreement with three trade unions that represented a majority of employees in the sector. This agreement was then extended within the terms of Section 23(1)(d) of the Labour Relations Act of 1995 (lra) to all employees at all mines in the sector, including the members of the Association of Mineworkers and Construction Union (amcu) which had rejected the agreement. The effect, among others, was to prohibit all employees from striking over any issue covered by the agreement.

Although amcu was a minority union in the sector as a whole, it represented a majority of workers at five mines owned by Harmony Gold Mining Company Ltd but not a majority of Harmony’s overall workforce. When amcu called a strike at those five mines in support of its unsatisfied demands, the Chamber of Mines obtained a Labour Court order prohibiting the strike on the basis of Section 23(1)(d). amcu appealed unsuccessfully against this order to the Labour Appeal Court and, from there, to the Constitutional Court.

The judgment of the Constitutional Court considers the nature and extent of limitations that may validly be placed on freedom of association and the right to strike at the workplace level in the interests of promoting collective bargaining at a sectoral level. In doing so, the Court applies relevant principles of international law as reflected in the International Labour Organization (ilo) Collective Agreements Recommendation of 1951 (No. 91), the Digest of Decisions and Principles of the Freedom of Association Committee of the Governing Body of the ilo (2006), and the ilo Committee of Experts’ General Survey on the Fundamental Conventions concerning Rights at Work in Light of the ilo Declaration on Social Justice for a Fair Globalization (2012). The judgment also considers possible conflict between the extension of collective agreements between private parties to nonparties and the rule of law.

Section 23(1)(d) provides that a collective agreement may provide for its extension to nonmembers in a “workplace” if, in summary, “(a) the employees are identified in the agreement, (b) the agreement expressly binds them, and (c) the trade unions party to the agreement have as their members the majority of employees employed by the employer in the workplace” (para. 3). The lra defines “workplace” as “the place or places where the employees of an employer work”; if an employer conducts two or more operations that are “independent of one another by reason of their size, function or organization,” however, then each of those operations will constitute a separate workplace (Section 213).

The Court rejected both arguments. Dealing with the first, the Court carefully analyzed the lra’s definition of “workplace” and concluded that Harmony’s individual mines were not independent operations. For statutory purposes, therefore, Harmony’s entire operation across all its mines amounted to a single workplace, which could be subject to a Section 23(1)(d) agreement.

That left the constitutional argument. The Court started by accepting that majoritarianism is “both a premise of and recurrent theme throughout the lra.”1 Section 23(1)(d) does limit the right to strike, but this limitation is justified by its benefit to orderly collective bargaining, and the extension of collective agreements is provided for in the relevant ilo instruments. Nor is majoritarianism oppressive of the rights of minority unions because they are free to organize, to gain organizational rights, and to pursue majority status.2 Given the extent and purpose of the limitation, the Court found it both reasonable and justifiable.3

The Court then turned to the question whether the method of extension (i.e., provisions in a collective agreement between private actors) violates the rule of law and thereby fails the test of legislative rationality. amcu argued that it did both “because (a) the rule of law requires that public power be exercised by state actors; and (b) permitting private actors to effectively exercise public power without independent public authority oversight violates the principle of legality.”4 This amounted to arguing that it was “irrational.” The Court accepted that “a measure which is irrational could hardly pass muster as reasonable and justifiable for purposes of restricting a fundamental right.”5 However, because the limitation that Section 23(1)(d) places on the right to strike had already been found justifiable, it was by the same token rational.6

However, does Section 23(1)(d) allow employers and trade unions to exercise public power arbitrarily? First, the Court found that there is no “impenetrable wall” between the exercise of public and private power because the law in many cases allows private actors to perform acts involving the exercise of public power. But when this happens, such exercise “must comply with the principle of legality—and from there a range of review mechanisms is available to a party claiming to be unfairly affected.”7 The Court accepted that determining whether a power is “public” is a difficult exercise and that it requires all relevant factors to be taken into account.8 But, having tested Section 23(1)(d) against the relevant criteria, the court concluded that “[t]he conclusion of a collective agreement triggering a statutorily licensed extension . . . is in its effects and substance an exercise of legislatively conferred public power.”9 Although this did not automatically make it “administrative” in nature, it did mean that such an agreement is “subject to judicial scrutiny” and “reviewable under the principle of legality,” because “all exercises of public power—including non-administrative action—[must] conform to minimum standards of lawfulness and non-arbitrariness.”10

It was therefore open to amcu to attack the rationality or legality of a collective agreement extended in terms of Section 23(1)(d), but in this case it had not done so. Its appeal was accordingly dismissed.

The judgment supports certain conclusions and recommendations in the ilo instruments, in particular that

The judgment furthermore gives principled support to the proposition that the extension of collective agreements does not undermine the rule of law. Specifically, it develops the point that the extension of collective agreement in accordance with legislation constitutes an exercise of public power that, as such, is subject to judicial review on grounds of rationality and legality.

The judgment adds to the ongoing reexamination of the scope for the extension of collective agreements as an essential aspect of sectoral or centralized bargaining. Collective bargaining in general and centralized bargaining in particular have come under mounting pressure in recent decades with the shift toward flexible forms of production and the growth of nonstandard forms of work beyond the limits of traditional bargaining units. Despite this, important sections of the workforce remain unionized and significant parts of industry and commerce remain suited to regulation by collective bargaining. For this reason alone, the basic tenets of collective bargaining will need to be continuously reinterpreted to establish their parameters in the face of ongoing challenges and changing conditions.12

Looking forward, the issues considered in the judgment are also important for another reason. It remains a central concern of labor law that, generally speaking, no effective mechanisms have been developed to regulate nonstandard work and protect nonunion workers. Until then, such regulation and protection may become more important in collective bargaining, albeit by default. Extension of collective agreements would be necessary to implementing such protection, and the rationale for extension as elucidated in the judgment would be a necessary basis for considering any legal challenges that may arise. 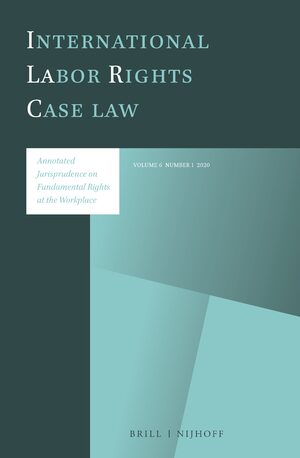