Encyclopaedia of the Qur'ān - Volumes 1-5 plus Index Volume (Set)

Series:  Encyclopaedia of the Qur'ān
Editor: Jane Dammen McAuliffe
The Qur'ān is the primary religious text for one-sixth of the world’s population. Understood by Muslims to contain God's own words, it has been an object of reverence and of intense study for centuries. The thousands of volumes that Muslim scholars have devoted to qur'ānic interpretation and to the linguistic, rhetorical and narrative analysis of the text are sufficient to create entire libraries of qur'ānic studies.

Drawing upon a rich scholarly heritage, Brill's Encyclopaedia of the Qur'ān (EQ) combines alphabetically-arranged articles about the contents of the Qur'ān. It is an encyclopaedic dictionary of qur'ānic terms, concepts, personalities, place names, cultural history and exegesis extended with essays on the most important themes and subjects within qur'ānic studies. With nearly 1000 entries in 5 volumes, the EQ is the first comprehensive, multi-volume reference work on the Qur'ān to appear in a Western language.

Cross-referencing and indices
Frequent cross-references will draw readers to related entries and each article will conclude with a citation of relevant bibliography. The final volume of the EQ will contain indices of transliterated terms, of qur'ānic references and of the authors and exegetes cited in the entries and essays. 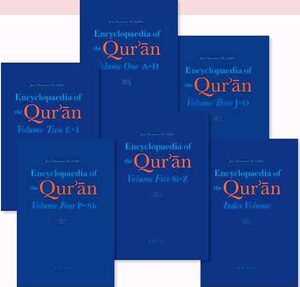 "McAuliffe's encyclopedia promises to become the central English-language reference work for qur'anic studies....The first volume fulfills the project's aim to summarize recent decades of scholarship and will without doubt fulfill another aim, to inspire new work in the decades to come. Enthusiastically recommended for all readership levels." – in: Choice, 2002
"The Encyclopaedia of the Qur'ān is an highly prestigious and competent volume from a superb publisher with contributions by the world’s leading experts. If readers were to own one volume on this topic, this work would be the encylopedia to own. The first volume is carefully and masterfully crafted and provides the expectation of valuable work to come…the scholarly community looks forward to future volumes." – Linda L. Lam-Easton, in: American Reference Book Annual 34
"The Encyclopaedia of the Qur'ān is a masterful, comprehensive book…" – in: Discourse, 2001
"The Encyclopaedia of the Qur'ān will be a truly collaborative enterprise, carried out by Muslims and non-Muslims, and its articles will present multiple approaches to the interpretation of the Qur'ān... A turn-of-the-millennium summative work for the state of qur'ānic scholarship." – in: Atlantic Monthly, 1999


The Encyclopaedia of the Qur'ān uses English-language entry words rather than transliterated terminology. This format makes the EQ accessible to both specialists in Arabic and Islamic studies as well as to scholars in such fields as biblical studies, medieval history, comparative literature and the social sciences. General readers, both Muslim and non-Muslim, will welcome the authoritative coverage that the EQ provides and the accessible format of its presentation. As the first such reference work on the Qur'ān in a Western language, the EQ will be indispensable for both academic and public libraries.