British Intelligence on Afghanistan and Its Frontiers, c. 1888-1946

Political and military strategies
The defense of the North-West Frontier of British India and the status of Afghanistan in the face of real or imagined Russian threats were dominant themes in the political and military strategies of British India for more than a hundred years, beginning with the First Afghan War intervention of 1838-1842, when the British frontier had not actually reached Afghanistan. Strategic planning and policy formulation required information - intelligence on the terrain, communications, resources, internal politics, tribal groupings, rivalries, and personalities - to provide both background for political relations and practical know-how for possible military operations.
Before 1922, there was no direct Government of India diplomatic or political representation inside Afghanistan, apart from disastrous attempts to station Residents at Kabul in 1838-1842 and 1878-1880, while the government in London did not consider Afghanistan to be a nation of a status requiring a diplomatic mission. Between 1882 and 1919, however, a succession of Indian Muslim Agents were posted to Kabul from India, and after the Third Afghan War of 1919-1921 full diplomatic relations were finally established. The British Ministers in Kabul up to 1949 were members of the Indian Political Service, but were appointed by the Foreign Office in London.
Early information-gathering was both patchy and dangerous, and depended upon the abilities of individual travelers, often in disguise, and the occasional employment of native newswriters. It was not until the outbreak of the Second Afghan War of 1878-1880 that the Government of India began to take more seriously the whole question of intelligence.

Military intelligence
In 1878 an Intelligence Branch was formed within the Quartermaster- General’s Department at Army Headquarters, India, consisting of three officers and two assistants. Reorganization in 1892 increased the complement to five officers and four assistants, and in 1903 the officer-in-charge was raised to the rank of Brigadier-General, with added responsibility for mobilization. The wide-ranging reforms of the Army in India Committee of 1912-1913 established an Intelligence Section (M.O.3) within the Military Operations Directorate of the General Staff. The Section, headed by a General Staff Officer Grade 1 reporting to a Brigadier-General Director of Military Operations, was divided into five subsections, four of them geographical (Afghanistan, Russian Turkestan and the North-West Frontier were subsection N), and the fifth devoted to “special work of a confidential nature.” Total staffing was fifteen officers and ten clerks. This arrangement, with regular increases of personnel, continued until the end of British rule in 1947.

Unique collection
Beginning rather slowly with historically oriented gazetteers and similar background works, the Intelligence Branch eventually issued a stream of practical handbooks, route books, military reports, tribal monographs, “who’s who” compilations, and summaries of events. Sources were officers in the field, particularly those stationed on the North-West Frontier, and their contacts, together with local tribesmen who had been clandestinely employed. All the works were classified “Secret,” “Confidential,” or “For Official Use Only,” and were subject to strict rules of custody. It was also ordered that when a new edition of a particular work appeared, all previous editions were to be destroyed. As a result, these works survive in very few locations.

Political intelligence
The Government of India Foreign & Political Department had a parallel intelligence interest, concentrating on Afghanistan’s internal and external affairs and trans-frontier tribes and personalities. It issued its own compilations, mainly sourced by political officers serving on the North-West Frontier or in Afghanistan proper, and often overlapping the work of the military.

Printed Correspondence
Of special significance, however, is the massive series of Foreign Department Printed Correspondence, totaling some 13,600 pages in 73 parts. Because it was archived in London separately from the main groupings of intelligence publications, the Printed Correspondence remains a little-known source. The series, in imitation of what had become standard practice at the Foreign Office in London, reprinted all incoming and outgoing correspondence and associated papers relating to Afghanistan between 1919 and 1941. Beginning as “Third Afghan War 1919 Correspondence,” the title eventually became “Afghan Series;” the pagination is frequently erratic, but within each part the documents run in a continuously numbered sequence.

Provenance
The secret and confidential print reproduced in the present collection are located in two internal reference libraries which were kept within the Military Department (L/MIL/17) and the Political & Secret Department (L/P&S/20) at the pre-1947 India Office in London. Items were received from India upon publication and were kept or disposed of according to the strict custody rules laid down by the originators. Exceptions are (1) the Foreign Department Printed Correspondence, which passed through the Political & Secret Department registry and was placed in “subject” files up to 1931 (L/P&S/10), and thereafter in “subject” collections (L/P&S/12); and (2) a small number of items which accumulated at the British Legation in Kabul (R/12) and were then brought to London, together with the Legation’s archive, in 1965. All the India Office departments were subsumed within the Commonwealth Relations Office (subsequently the Foreign & Commonwealth Office) after Independence in 1947. In 1982, Library & Records to the British Library, where it now forms a part of the Library’s Oriental & India Office Collections. 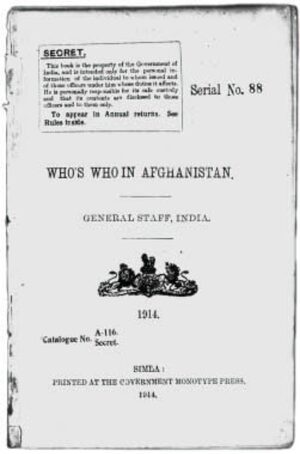