The thousands of pamphlets presented here constitute an essential source for understanding these tumultuous periods of history. They range from political apologies and manifestoes to tracts for and against predestination in theology. Along the way, battles, sieges, treaties, riots, and political assassinations form the subject matter of many pamphlets. Domestic issues of all sorts are commented upon or caricatured, sometimes in rhyme, and political events outside the Lowlands are also chronicled. Tracts on astrological predictions and the appearance of comets permit the study of popular culture and mentalities. In short, historians of all sorts can draw on these texts for their research. The majority of the pamphlets are in Dutch but there are also texts in French, German, Latin, and English. The IDC collection incorporates all pamphlets cataloged by W.P.C. Knuttel in the last decades of the 19th and the early decades of the 20th century.

Part I: 1486-1648
The period from 1486 to 1648 was of crucial significance for the history of the Low Countries and the present Dutch State. This period witnessed first the consolidation of 17 quite disparate provinces under the hegemony of the Habsburg Monarchy. Later the Revolt of the Netherlands against the Spanish Habsburg king Philip II led in the course of 80 years of warfare to the establishment of the Republic of the United Provinces, the forerunner of the modern Netherlands State. The southern Netherlands - now the modern states of Belgium and Luxembourg - continued under Habsburg dominion. Inextricably bound up with these developments on the political level, was the history of the Reformation in the Low Countries. The successful implantation of Calvinist Protestantism in the North and the triumph of Counter-Reformation Catholicism in the South were recognized in 1648 in the Treaty of Munster, which ended the Eighty Years War.

Part II: 1649-1750
After the official recognition of its independence in 1648 the Dutch Republic quickly established itself as an economic, political and military power in Europe and a formidable contender in the struggle for trade and glory overseas. The second half of the 17th century was a golden age for the Dutch. Economic rivalry with England led to several naval wars, but in 1689, the Dutch stadhouder William of Orange was invited to assume the throne of that country after the Glorious Revolution had driven James II from power. In the disaster year of 1672 French and other armies penetrated deep into Dutch territory, exacerbating the internal conflict between the States and Orangist parties that led to the murder of the Grand Pensionary Johan de Witt and his brother by a mob in The Hague. The Republic survived this ordeal, recovered and prospered. The 18th century brought a relative eclipse of the Republic on the European stage and the beginnings of the reforming Patriotsmovement at home.

Part III: 1751-1853
Dutch pamphlet-writing in the second half of the eighteenth century was dominated on the home front by the struggle between the conservative Orange ‘party’ and the reformist ‘patriots’, a conflict which culminated in near revolution in 1787, and by the Fourth Anglo-Dutch War (1780-84) between the Dutch Republic and Great Britain. Meanwhile, milestones of international history such as the American War of Independence and the French Revolution did not, of course, pass unnoticed. The turn of the century witnessed the transformation of the worn-out Dutch Republic into a modern state through the French invasion of 1795, the formation of a semi-independent Batavian Republic and Napoleonic Kingdom of Holland, the annexation by France and finally the creation of the Kingdom of the Netherlands as we know it today, under the restored House of Orange in 1813- 1815. The Belgian insurrection of 1830 and the political reforms of 1848 were the principle events of the next forty years to form the basis for discussion, while many pamphlets were devoted to subjects such as the colonies and slavery, the introduction of railway transport, the discovery of smallpox vaccine and the re-establishment of the Roman Catholic ecclesiastical hierarchy.

Language note
Texts primarily in Dutch; some in French, German, and Latin. 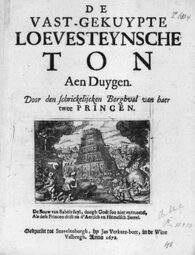 "Pamphlets provided early modern dissident movements with a new and powerful tool to publicise their causes, nowhere more effectively than by the protagonists in the Dutch Revolt. By far the most complete collection of these pamphlets, published in Dutch but also in French, German and Latin, was made by the nineteenth-century Dutch bibliographer and librarian Willem Knuttel. The online publication of this hitherto under-used resource, which will allow the application of new techniques, will surely transform our understanding of the early modern history of the Low Countries."
Alastair Duke, University of Southampton

"TEMPO [The Early Modern Pamphlets Online] is, at this time, the closest Dutch equivalent to such monumental online resources as EEBO (Early English Books Online), ECCO (Eighteenth Century Collections Online), and Gallica. So wide is the range of materials contained in the Knuttel collection, and so fundamental the importance of many of the pamphlets it contains, that there is practically no historian of the Dutch Republic who has not used it. To digitize such a resource is to revolutionize how it can be used, and by whom. Students as well as scholars, and historians of other lands as well as the Netherlands, will soon be discovering it as well."
Benjamin Kaplan, University College London

"The vast and rich pamphlet collection of the Koninklijke Bibliotheek, as cataloged by W.P.C. Knuttel, is an indispensable resource for generations of historians of the early modern Netherlands. The online publication of these pamphlets will forever change the landscape of research and teaching in this field."
Henk van Nierop, Universiteit van Amsterdam

"The Knuttel collection represents one of the most extraordinary resources for students of sixteenth-century politics, religion and print culture. It is marked by a striking coherence, and enhanced by a superbly scholarly catalogue. It is a fundamental resource which deserves to be far better known and far more intensively studied."
Andrew Pettegree, University of St Andrews