The six-volume Brill’s Encyclopedia of Hinduism -with first volume published in 2009 and completed in 2014 with Vol. 6- is a thematic encyclopedia, presenting the latest research on all the main aspects of the Hindu traditions in original essays written by the world’s foremost scholars on Hinduism. The Encyclopedia explicitly adopts an interdisciplinary and pluralistic approach, and in it, the term “Hinduism” is used critically in the knowledge that most of the traditions that today make up Hinduism are much older than the term itself. The Encyclopedia aims at a balanced and even-handed view of Hinduism, recognizing the tensions inherent in the academic examination of Hinduism. It emphasizes that Hinduism is a conglomerate of regional religious traditions and at the same time a global world religion. Hinduism is also both an ancient historical tradition and a living tradition flourishing in the contemporary world. It is an oral tradition, yet one with a huge number of sacred texts at its basis. Hinduism is both a religious identity and an object of academic scholarship. 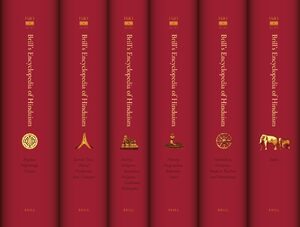 EUR  €1,524.00USD  $2,180.00
Contact Sales
Knut A. Jacobsen (Editor-in-Chief), University of Bergen, and Helene Basu, University of Münster, Angelika Malinar, University of Zürich, Vasudha Narayanan, University of Florida (Associate Editors)
"...an invaluable addition to our growing knowledge about the age-old and complex religion that is Hinduism, and represents a very useful tool for all those who are engaged in academic research about it." – Benedict Kanakappally, in: Bibliographia Missionaria LXXXIV (2010)
"These are excellent volumes. There is nothing published quite like it in scope and depth. It brings together some of the most recent scholarship, takes a broad understanding of Hinduism, and is multi-disciplinary in approach, drawing on Indology, History of Religions, and Theology and dealing with both traditional topics and themes of contemporary concern such as human rights and feminism. This is an invaluable resource for students and scholars." – Gavin Flood, University of Oxford
"The scholarly world has long awaited an encyclopedia on Hinduism of the appropriate depth and comprehensiveness. With contributions from leading scholars from around the world on the subject, Brill's Encyclopedia of Hinduism is a prime example of fulfilling this need for generations to come. Scholars and students of Hinduism owe the editor and publisher of these handsome volumes a huge debt of gratitude." – Julius Lipner, Professor emeritus of Hinduism and the Comparative Study of Religion, University of Cambridge
‘On the whole, due to its sheer scope, academic excellence and reliability, the Brill’s Encyclopedia of Hinduism is a must for any reference library, especially for institutions with programmes on Hinduism and Indic studies (…) a profitable long-term investment.’
Jan Filipsky, Emeritus Scholar, the Oriental Institute of the Czech Academy of Sciences, Archiv Orientalni 85 (2017).

All those interested in religions in South Asia, the history of Hindu tradition, as well as Indologists and historians of religions.