This project consists of three volumes. The first volume deals with the European state of affairs from the sixteenth until the eighteenth century. The second volume focuses on the nineteenth century, and the third volume discusses the history and role of Christianity in the twentieth century.

The German edition of the work is available at Kohlhammer Verlag. 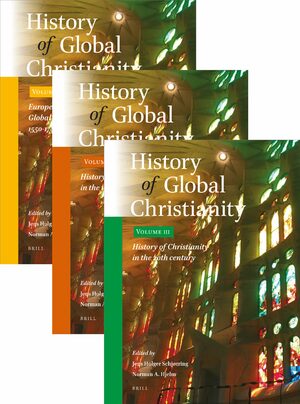 EUR  €499.00USD  $575.00
Contact Sales
Jens Holger Schjørring, Dr. Theol. (Aarhus University), is Professor of Church History emeritus at Aarhus University, Denmark. His publications include Theologische Gewissensethik und politische Wirklichkeit: Das Beispiel Eduard Geismars und Emmanuel Hirschs (1979) and Ökumenische Perspektiven des deutschen Kirchenkampfes (1985) and studies of the relationship between African and European churches and those of Eastern Europe under Communist rule.
Norman A. Hjelm, Teol.Dr. (h.c.) (Uppsala University, 2009), has been senior theological editor and director of Fortress Press in the United States, an executive with the Lutheran World Federation in Geneva, Switzerland, and an ecumenical officer for the National Council of Churches in the U.S. Most recently he has contributed to The Finnish and Estonian Churches during the Cold War (2016) and to The North American Christian Community and the Cold War (2017).
Kevin Ward is a Senior Lecturer in African Religious Studies at the University of Leeds, U.K.. He focuses on the history and spirituality of Christianity in East Africa.

All interested in the global history of Christianity, its expansion, its relationships to societies and civilizations, and its internal confessional development. Undergraduate and postgraduate students, and students and specialists in history, culture, and ecclesiology.