Editor: Hanna Siurua
Author: Patricia Crone
Patricia Crone's Collected Studies in Three Volumes brings together a number of her published, unpublished, and revised writings on Near Eastern and Islamic history, arranged around three distinct but interconnected themes. Volume 1, The Qurʾānic Pagans and Related Matters, pursues the reconstruction of the religious environment in which Islam arose and develops an intertextual approach to studying the Qurʾānic religious milieu. Volume 2, The Iranian Reception of Islam: The Non-Traditionalist Strands, examines the reception of pre-Islamic legacies in Islam, above all that of the Iranians. Volume 3, Islam, the Ancient Near East and Varieties of Godlessness, places the rise of Islam in the context of the ancient Near East and investigates sceptical and subversive ideas in the Islamic world.

The Qurʾānic Pagans and Related Matters
The Iranian Reception of Islam: The Non-Traditionalist Strands
Islam, the Ancient Near East and Varieties of Godlessness 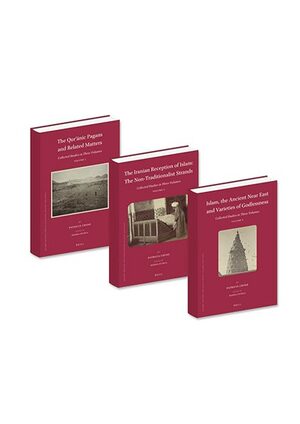