Editors: David Frankfurter, Johannes Hahn, and Frits Naerebout
Author: Various Authors & Editors
The online collection of Religions in the Graeco-Roman World, Brill’s flagship series in religion in antiquity, presents monographs and collections of essays that make original contributions to this long-standing field. The series, formerly known as Études Préliminaires aux Religions Orientales dans l'Empire Romain, is a forum for studies in the social and cultural function of religions in the Greek and the Roman worlds, dealing with the religions of city and region between ca. 400 bce and 700 ce, both on their own terms and in their interaction with early Christianity, Judaism, and Islam. Special attention is given to the religious history of regions and cities which illustrate the practical workings of these processes.

This 2017 Supplement contains Volumes 184-187 from the Religions in the Graeco-Roman World book series: Where Dreams May Come: Incubation Sanctuaries in the Greco-Roman World, by Gil Renberg Sacred Thresholds: The Door to the Sanctuary in Late Antiquity, edited by Emilie van Opstall The Tradition of Hermes Trismegistus: The Egyptian Priestly Figure as a Teacher of Hellenized Wisdom, by Christian H. Bull Individuals and Materials in the Greco-Roman Cults of Isis: Agents, Images, and Practices, edited by Valentino Gasparini and Richard Veymiers 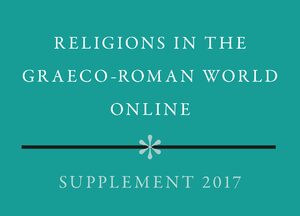