The Works of Ibn Wāḍiḥ al-Yaʿqūbī (3 vols): An English Translation

Series:  Islamic History and Civilization, Volume: 152
Editors: Matthew S. Gordon, Chase F. Robinson, Everett K. Rowson, and Michael Fishbein
The Works of Ibn Wāḍiḥ al-Yaʿqūbī contains a fully annotated translation of the extant writings of Abū al-`Abbās al-Ya`qūbī, a Muslim imperial official and polymath of the third/ninth century, along with an introduction to these works and a biographical sketch of their author. The most important of the works are the History ( Ta’rikh) and his Geography ( Kitab al-buldan). The works also contains a new translation of al-Ya`qubī’s political essay ( Mushakalat al-nas) and a set of fragmentary texts drawn from other Arabic medieval works. Al-Ya`qūbī’s writings are among the earliest surviving Arabic-language works of the Islamic period, and thus offer an invaluable body of evidence on patterns of early Islamic history, social and economic organization, and cultural production. 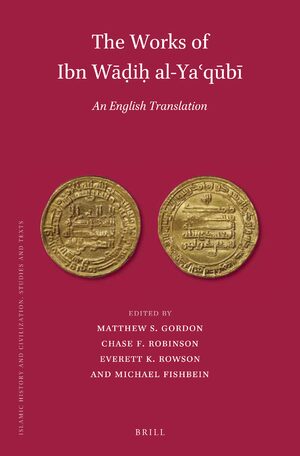 Chase F. Robinson, Ph.D. (1992), Harvard University, is Distinguished Professor and President of the Graduate Center of the City University of New York. He has written or edited some 8 books and 40 articles on Islamic history. His most recent book is Islamic Civilization in 30 Lives (Thames & Hudson, 2016).

Michael Fishbein, Ph.D. (1988), University of California at Los Angeles, is a retired Lecturer in the Department of Near Eastern Languages and Cultures at that university, where he taught Arabic language and literature for many years. He is the translator of Volumes VIII, XXI, and XXXI of the SUNY History of al-Ṭabarī.

All interested in the early and medieval Islamic period and the history of the caliphate; geography, urbanisation and commerce in the medieval Mediterranean; the transmission of Late Antique culture and intellectual heritage into Arabic; Arabic society and culture.