Editors-in-Chief: Kate Fleet, Gudrun Krämer, Denis Matringe, John Nawas and Everett K. Rowson
The Encyclopaedia of Islam Online (EI Online) is a unique and invaluable reference tool, an essential key to understanding the world of Islam. Brill was the first academic publisher to publish an encyclopedia on Islam, and the Encyclopaedia remains a cornerstone of its publishing program. The Encyclopaedia is a large-scale collective reference work compiled by the most prominent scholars in the field, touching on all aspects of Islam from the time of the Prophet to the present day.

Two 'editions' are included in the EI Online:

The Encyclopaedia of Islam Second Edition (EI2, published from 1955-2005)
A continuation of the highly acclaimed Encyclopaedia of Islam First Edition (1913-1936)*. The EI2's geographical scope encompasses the old Arabic-Islamic empire, the Islamic countries of Iran, the Ottoman Empire, Central Asia, the Indian sub-continent, Indonesia and many other Islamic countries. Entries are on religion, geography, ethnology, history, topography, culture and Muslims who have distinguished themselves in any particular aspect. Finished in 2005, the EI2 is a massive resource spanning five decades of scholarship.


Reviews
"Continues the heritage of the previous editions in striving to achieve excellence, and it remains an essential acquisition for libraries supporting academic study of Islam, Middle Eastern studies, or the Arabic language. Summing Up: Essential."
- C.A. Sproles, University of Louisville, CHOICE connect, December 2016

* Encyclopaedia of Islam First Edition and the EI-2 French Edition are not included in the EI Online, but available as separate products. 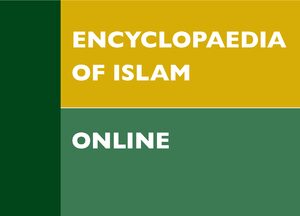 Recent Updates to the Encyclopaedia of Islam Online