Brill's New Pauly Supplements Online II brings together seven reference volumes for study of the Ancient World and its reception in later centuries. Two reception volumes focus on the Renaissance and Enlightenment periods, while the volume about the reception of historical figures complements that about figures from mythology (vol. 4). The other four volumes are about Antiquity itself – including Early and Late Antiquity.

The English edition is only available as a set with the German version Der Neue Pauly Supplemente II Online. 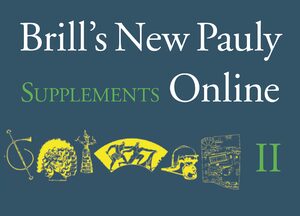