Series Editors: Valentina Calzolari and Theo Maarten van Lint
This series combines persisting needs with emerging emphases in Armenian studies. It encourages studies that place Armenian culture in its multifaceted international context, on the Armenian plateau as well as in its historic and current Diaspora.
Philological studies containing important critically edited texts, translations and commentaries remain in need as before. Thousands of Armenian manuscripts await disclosure in order to become part of scholarly and popular discourse and take their place in a field that invites an interdisciplinary and pluralistic approach like few others.
Armenian literature from the seventeenth century up to the present is understudied and will amply repay scholarly engagement.
In recent decades, the study of Armenian material culture, mythology and folklore has made great strides, next to art and architecture.The series welcomes contributions in these extensive fields.
Armenian Texts and Studies deals with Armenian prehistory up to the modern and contemporary period and promotes research that applies methods current in sociology, anthropology and other social sciences next to those used in literary, linguistic and historical studies, including the study of Armenian cinema and modern media. 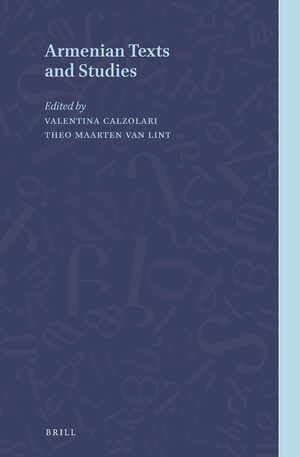 Contact sales
Valentina Calzolari is Professor of Armenian Studies at the University of Geneva and the current President of the Association Internationale des Etudes Arméniennes. She has published extensively on ancient Armenian Literature. She is co-editor of the series Commentaria in Aristotelem Armeniaca. Davidis Opera (Philosophia Antiqua, Brill).

Theo Maarten van Lint, is Calouste Gulbenkian Professor of Armenian Studies at the University of Oxford. His research interests and publications focus on Armenian poetry, Medieval Armenian literature, Armenian literary and intellectual life in Iran, India, the Ottoman Empire and Russia in the 17th-19th centuries, and Modern Armenian literature and its international context from the 19th century onward.

Armenologists and scholars and students from broader areas.