Editors: Leo Tak-hung Chan, Gabriela Saldanha, Şebnem Susam-Sarajeva, Tom Toremans and Michaela Wolf
Approaches to Translation Studies is an international series promoting the scholarly study of translation. The notion of plural ‘approaches’ to translation and its study calls up images of scholarly explorers following untrodden paths to translation, or more cautiously (re)tracing the familiar routes. Either way, it indicates a refusal to be tied to dogma or prejudice, a curiosity about possible new vistas, and an awareness that the observer’s view depends on where s/he comes from. But a recognition of the plurality of possible approaches does not necessarily mean passive acquiescence to relativism and scepticism. The idea of ‘approaching’ translation also implies a sense of purpose and direction.

In the context of today’s globalised and pluralised world, this metaphorically suggested perspective is perhaps more relevant than ever before. The series therefore remains fully committed to it, while trying to respond to the rapid changes of our digital age. Ready to travel between genres, media and technologies, willing to span centuries and continents, and always keeping an open mind about the various oppositions that have too often needlessly divided researchers (e.g. high culture versus popular culture, linguistics versus literary studies versus cultural studies, translation ‘proper’ versus ‘adaptation’), the series Approaches to Translation Studies will continue to accommodate all translation-oriented books that match high-quality scholarship with an equal concern for reader-friendly communication.

Approaches to Translation Studies is open to a wide range of scholarly publications in the field of Translation Studies (monographs, collective volumes…). Dissertations are welcome but will obviously need to be thoroughly adapted to their new function and readership. Conference proceedings and collections of articles will only be considered if they show strong thematic unity and tight editorial control. For practical reasons, the series intends to continue its tradition of publishing English-language research. While students, teachers and scholars in the various schools and branches of Translation Studies make up its primary readership, the series also aims to promote a dialogue with readers and authors from various neighbouring disciplines.

Approaches to Translation Studies was launched in 1970 by James S Holmes (1924-1986), who was also one of the ‘founding fathers’ of Translation Studies as an academic discipline. At later stages the series’ editorship passed into the hands of Raymond van den Broeck, Kitty M. van Leuven-Zwart and Ton Naaijkens. Being the very first international series specifically catering for the needs of the fledgling discipline in the 1970s, Approaches to Translation Studies has played a significant historical role in providing it with a much needed platform as well as giving it greater visibility in the academic marketplace.

Volumes 2, 4, and 5 were published by van Gorcum (Assen, The Netherlands), but orders should be directed to Rodopi. 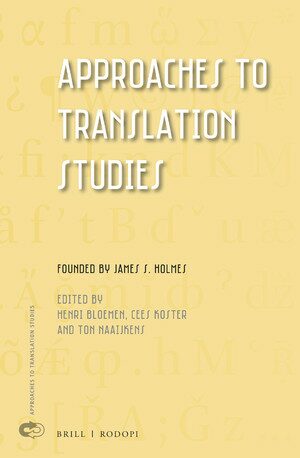