The progressive spread of Arabic as the dominant spoken and written language in the lands conquered by Islam led the Jewish, Christian and Samaritan communities under its rule to translate their sacred scriptures: the Hebrew Bible, the Old and New Testaments and the Samaritan Pentateuch respectively, into Arabic from languages such as Hebrew, Greek, Syriac, Latin and Coptic. This resulted in a large number of partial and integral translations revealing a great variety in stylistic approaches, vocabulary, script, and dogmatic concerns. Many of the surviving manuscripts and fragments are nowadays kept in libraries all over the world and still await edition and closer study. This series addresses this lacuna in research by publishing critical (including synoptic) editions of Arabic versions of individual biblical books produced in the Middle Ages and beyond, as well as studies that examine the different schools and persons that took part in this scriptural translation enterprise, analyzing their aims and methodologies, as well as the social and cultural implications of their endeavor. In addition, the reception of and reactions to these Bible translations by Muslim authors fall within the scope of the series. 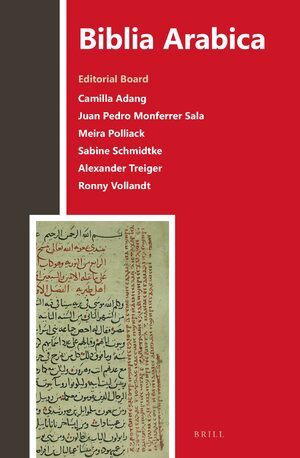