Brill's Studies in the Indigenous Languages of the Americas

Editors: David Beck, Mily Crevels, Hein van der Voort, and Roberto Zavala
This peer-reviewed book series offers an international forum for high-quality scholarly studies on the indigenous languages of South, Central and North America, including the Arctic. Around 1,000 genealogically and typologically very diverse languages are spoken in this immense region. Due to ecological and cultural pressure this treasure trove of languages is often highly endangered with extinction, hence the urgency of its preservation and study. The publications in this series will concern both descriptive and analytical work on American indigenous languages, and include handbooks, language surveys, grammatical descriptions and theoretical, historical, areal and typological monographs or particularly well-organized edited volumes with a central theme. Even though the scope of the series is international, authors are encouraged to write in English to reach as large as possible a readership. 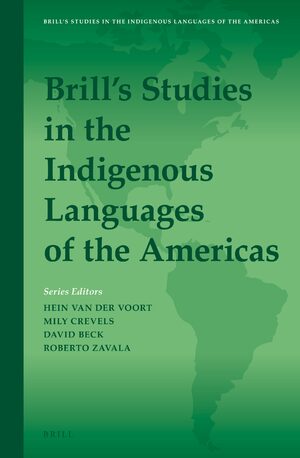 Contact sales
David Beck, Ph.D. (1999) in Linguistics, University of Toronto, is an Associate Professor in the Department of Linguistics at the University of Alberta. He has published extensively on the morphosyntactic and typological properties of the Salishan languages Bella Coola and Lushootseed and on Upper Necaxa Totonac, a Totonacan language of Mesoamerica.
Mily Crevels, Ph.D. (2000) in Linguistics, University of Amsterdam, is a senior researcher at the Centre for Language Studies, Radboud University Nijmegen. Her interests include linguistic typology and descriptive linguistics. She has conducted extensive fieldwork in the Bolivian Amazonian lowlands since 1999 and has published, among others, on language endangerment and areal linguistics.
Hein van der Voort, Ph.D. (2000) General Linguistics, University of Leiden, is a researcher at the Museu Paraense Emílio Goeldi, Belém, Brazil. He has published on Amazonian languages, Eskimo languages, Romani, Pidgins and Creoles. Since 1995, he has been conducting fieldwork on various languages in the Brazilian Amazon. His current project deals with language relationships in the Guaporé region of Bolivia and Brazil.
Roberto Zavala, PhD (2000) in Linguistics University of Oregon, is professor and researcher at CIESAS-Sureste, a Mexican interdisciplinary research center for Social Sciences. He has conducted extensive fieldwork on Mayan, Uto-Aztecan and Mixe-Zoquean languages and has written two grammars and several papers on Wastek, Akatek and Olutec. Currently he is working on language contact in the southern part of Mesoamerica, and language documentation of Zoque, Olutec and Chol.

The core target of the series consists of Americanists, typologists, theoretical linguists, as well as linguists in general. In addition, the series aims at scholars in related disciplines, such as anthropologists, archaeologists, ethnobiologists, historians and geneticists.