Editors: Alexandra Y. Aikhenvald, R.M.W. Dixon and N.J. Enfield
Brill’s Studies in Language, Cognition and Culture (BSLC) is a peer-reviewed book series that offers an international forum for high-quality original studies in languages and cultures. It focuses on the interaction between linguistic categories (and their conceptualization), cultural values, and human cognition. Publications will include interdisciplinary studies on language, its meanings and forms, and possible interactions with cognitive and communicational patterns. The series spans cultural and social anthropology, cognitive science and linguistics. The emphasis is on inductive based cross-linguistic and cross-cultural studies, with special attention to poorly known areas, such as Lowland Amazonia and the Pacific. In this series are also welcome culturally informed grammars which highlight the correlations and the interactions between languages and the societies in which they are spoken, with special focus on studies emanating from loci of linguistic diversity. 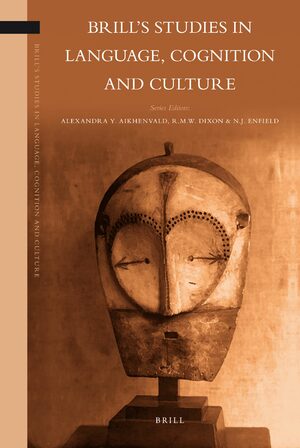 Contact sales
Alexandra Aikhenvald (PhD 1984 in Linguistics, Academy of Sciences of the USSR, Doctor of Letters 2006, La Trobe University) is Professor and Research Leader (People and Societies of the Tropics) at the Cairns Institute, James Cook University. She has published extensively on areal linguistics and language contact, and linguistic and cultural features of South America and New Guinea, in addition to several grammars of Arawak languages from Amazonia. She is the author of seminal monographs Classifiers, Evidentiality and Imperatives and commands, and has also published on other issues in linguistic typology.

R. M. W. Dixon (PhD 1968 in Linguistics, University of London, Doctor of Letters 1991, Australian National University) is Adjunct Professor at the Cairns Institute, James Cook University. He has published extensively on typological theory, and genetic and areal relationships between languages, in addition to a grammatical study of English. He has published comprehensive grammars of a number of Australian languages (including Dyirbal and Yidiñ), of Boumaa Fijian and of Jarawara from southern Amazonia. His seminal essay, The rise and fall of languages, was a prolegomenon to his inclusive study Australian languages: their nature and development.