In the political sense, South Asia encompasses the seven independent states of Bangladesh, Bhutan, India, the Maldives, Nepal, Pakistan and Sri Lanka, but linguistically and culturally also includes some adjacent areas to the east and north, notably Tibet. Southwest Asia is understood here as comprising the Iranian language-speaking territory to the west of South Asia, i.e., the states of Afghanistan and Iran and the geocultural transnational region Kurdistan, consisting of parts of Turkey, Iraq, Iran and Syria.

The languages – both ancient and modern – of South and Southwest Asia have played a central role in linguistics from the field’s very beginnings as a modern scientific endeavor, and continue to occupy a central position in discussions in many linguistic sub-disciplines, including the following, among others:

The series seeks high-quality, state-of-the-art contributions on all aspects of the languages of this linguistically diverse and fascinating area. 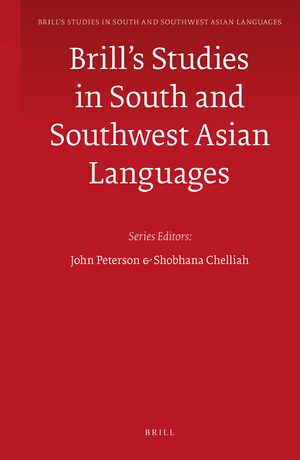