Sacred Texts and Their Commentaries: Jewish, Christian and Islamic

Editors: Grover Zinn, Michael Signer (ob.), Frans van Liere, Lesley Smith, E. Ann Matter, Thomas E. Burman, Robbie Harris, Walid Saleh, and Celia Chazelle
Commentaria is a series dedicated to outstanding monographs or edited volumes of essays (topical or from conferences) that address subjects within the general area of the interpretation (exegesis) of the sacred texts of three major religious traditions: Judaism, Christianity and Islam. Proposals for books written in major European Languages (English, French, German) will be welcome, with a preference for English. The time period to be covered by the series extends from Late Antiquity through to the Late Middle Ages.

The editors envision this series as one embracing a broad range of topics, approaches, and methods. Monographs may address a single tradition or undertake a comparative study of a theme, topic, or hermeneutical strategy in two or three of the traditions, or in several branches or aspects of the same tradition (e.g. Eastern Orthodox and Western Catholic traditions in Christianity, Al Tabari and Al Ghazali in Islam, or the schools of Rashi and Joseph Kimchi in Judaism). Commentaria welcomes studies on sacred myth and narrative; interreligious dialogue; scriptural exegesis; modes of representation; traditions of illumination; methods of manuscript production.

Authors are encouraged to send their proposals or manuscripts to the editors.

The series published three volumes over the last 5 years. 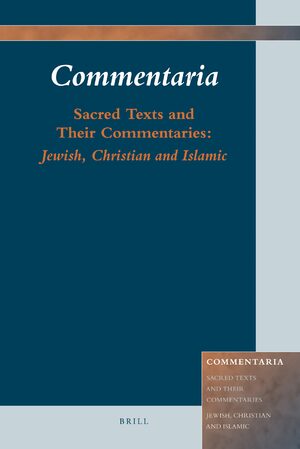 All those interested in the interpretation (exegesis) of the sacred texts of three major religious traditions: Judaism, Christianity and Islam.