Editors: Eva Zettelmann and Sylvia Mieszkowski
DQR Studies in Literature is a longstanding book series for state-of-the-art research in the field of English-language literature(s.) The series welcomes high-quality investigations which deepen, renew or revise traditional approaches, and encourages studies which advance fresh frameworks. In addition to covering the field of Anglophone literature(s) in its historical, cultural, national and ethnic complexity, the series offers a platform to emerging approaches which place the literary text in a meaningful relation to the widest possible range of contexts, methodologies and fields of enquiry.
Transdisciplinary cross-overs may include but are not limited to cultural analysis, cultural studies, gender studies and queer theory, cognitive studies, social sciences, empirical analysis, medical humanities, network theory, sound studies, mobility studies and ecocriticism.
We recently opened a sister series: DQR Studies in the Lyric, which offers a platform for an international exchange of innovative methodologies and theoretical advances in the study of poetry and poetics.


All submissions are subject to a double blind peer review process prior to publication.

DQR Studies in Literature is a book series which first began in 1986 as an offshoot of the journal, Dutch Quarterly Review of Anglo-American Letters that flourished from 1971 until 1992.
Since its inception we focus on themed volumes in this series.

Authors are cordially invited to submit proposals to the publisher at BRILL, Masja Horn. 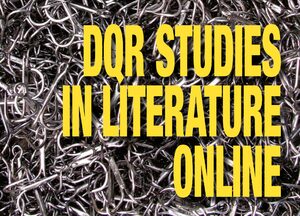