On his death, Felix Jacoby left uncompleted the original plan for his massive and now standard compilation: Die Fragmente der griechischen Historiker. Not only was he unable to complete his commentary to Volume III C, but no parts of three whole sections foreseen in the original plan were ever published.
Jacoby did however leave behind a considerable Nachlass of more than 1200 pages of notes and outlines relating to his commentary to FGrHist Volume III C. Charles Fornara is undertaking the task of publishing in fascicles Jacoby's text (sometimes with minor modifications), making additions of his own (between brackets). In writing this commentary Professor Fornara has tried to follow the stylistic conventions which Jacoby preferred and has done his best to emulate his general approach. This first part of the work deals with Graeco-Egyptian sources (Nos. 608a-665). Once this is completed, Professor Fornara will write a general introduction to the Graeco-Egyptian segment, including part of what Jacoby had written. It is anticipated that the work will comprise 8 fascicles and will be completed before 2005.
An international venture is now also underway to prepare and publish two of the sections which Jacoby had planned but never managed to publish.
Part IV (Biography, history of literature and antiquarian literature) will be undertaken by a team including J. Bollansee (Leuven), K. Brodersen (Muenchen), J. Engels (Cologne), A. Henrichs (Cambridge, Mass.), E. Krummen (Zuerich), G.A. Lehmann (Goettingen), H.-G. Nesselrath (Bern), J. Radicke (Koeln), J. Raeymaekers (Leuven), G. Schepens (Leuven), and E. Schuetrumpf (Boulder, Colorado). The first fascicles can be expected in the course of 1999.
Part V (historical geography) is to be coordinated by a working group of the Ernst-Kirsten-Gesellschaft, comprising H.-J. Gehrke (Freiburg) as spokesperson, with P. Funke (Muenster), E. Olshausen (Stuttgart), F. Prontera (Perugia).
Furthermore a group working under Prof. G. Schepens (Leuven) has undertaken to prepare a full index to the existing volumes of FGrH. This will be ready at the end of the 1990s.
The work will be published in fascicles in a temporary paper binding. A cloth binding will be made available with the last fascicle.

This volume contains a complete collection of the fragments of the Greek biographers of the Imperial times as well as of the undated authors.
Apart from the Greek text, it also includes an English translation of the testimonies and fragments, and provides a rich commentary, making it a useful instrument both for scholars and students. 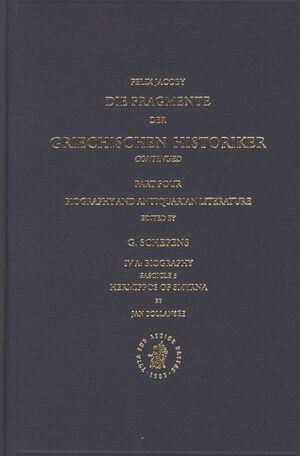