Editors: John Marenbon, Margaret Cameron, Thérèse Cory, Nadja Germann, Simo Knuuttila, Martin Lenz, Charles H. Manekin, and Chris Martin
Aims and Scope
The series aims to provide a peer-reviewed* forum for high-quality monographs and coherent collective volumes on medieval philosophy, written in such a way as to make them comprehensible and interesting to mainstream philosophers and historians of philosophy in Anglophone philosophy departments. Volumes in the series are not required to use medieval philosophy to make a direct contribution to debates in contemporary analytical philosophy (although this is one possibility), but the manner in which the medieval texts are treated should reflect, in an historically sensitive way, the methods and the language of contemporary analytical philosophy – in especial, its ideals of clarity and unpretentiousness. There are many different varieties of this general ‘analytical’ approach, and the series is open to any of them. The scope of medieval philosophy is taken widely, to include the Arabic, Greek and Jewish traditions, as well as the Latin one, and to run from c.500 to c.1500; works which go on even so far as 1700 may be considered, if they are at least equally concerned with the period before 1500.
• The series is intended to provide a forum for both promising young scholars as well as established researchers.
• Volumes may consist of essay collections (10-18 essays, 6,000-10,000 words each), conference proceedings, and monographs on substantial subjects (80,000 – 200,000 words), with the exception of unrevised PhD dissertations.
• Books are welcome which bring together different disciplines, so long as they fit the aims of the series.
• All books are refereed, and there will be a requirement of philosophical rigour and impeccable historical and textual scholarship. Conference proceedings and other collections of essay must demonstrate a clear rational and internal coherence.

Publications in this series will be of interest to scholars with interests in medieval and analytic philosophy, especially in the Anglophone world. 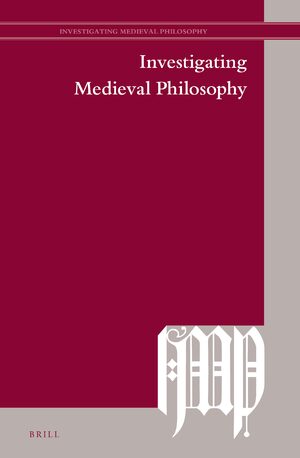