Editors: Emilie Savage-Smith, Hans Daiber, and Anna Akasoy
In Islam, philosophy, theology and science have interacted intimately almost from the beginning and played an important part in the intellectual history of Islam. For the historian of science and for the student of philosophy, the rich literature of Islamic philosophy, theology and science has preserved much unique material. This betrays the originality of scholars, who were inspired by Greek-Hellenistic culture and its absorption in an Christian and Islamic milieu.

This series provides an outlet for the results of research on these subjects and on the history of ideas in early Islam.
Philosophy was at the basis of much of intellectual life in the Islamic Middle Ages. The study of philosophy developed considerably, as did theology and the sciences. These have in turn been crucial to the development of intellectual history in Islamic countries until today. It may even be said that for any serious and comprehensive research into the history of thought inside and outside Europe, knowledge of the Islamic sources is indispensable. Owing to the lack of printed editions of many of these Islamic sources, however, the edition and study of texts on islamic philosophy, theology and science is still a rather neglected field of research.

The present series is intended to fill this need, making the field accessible through the publication of text editions, annotated translations, collaborative volumes, handbooks, and studies of individual concept, of the lives and thought of individual historical figures, etc. Volumes in the series place the subject in the context of relevant historical and intellectual developments of the time and, where desirable, against the background of their Greek, Syriac, or Iranian origins. 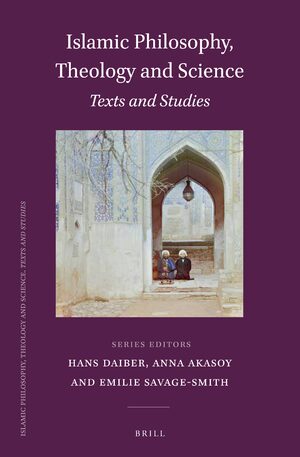 If you are interested in submitting proposals for this series, please contact:
Abdurraouf Oueslati
Acquisitions Editor
oueslati@brill.com

From the Greeks to the Arabs and Beyond