United Nations Convention on the Law of the Sea 1982

These commentaries are based almost entirely on the formal and informal documentation of the Third United Nations Conference on the Law of the Sea (UNCLOS III, 1973-1982), coupled, where necessary, with the personal knowledge of editors, contributors, or reviewers, many of whom were principal negotiators or UN personnel who participated in the Conference.

Also available online: United Nations Convention on the Law of the Sea Online. 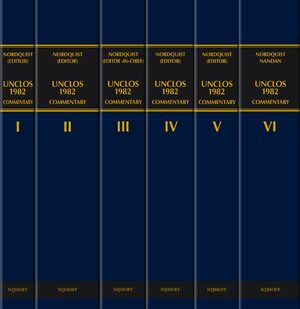 Contact sales
"This series is an invaluable source for law of the sea scholars and practitioners alike, who owe a great debt to the Virginia Center for Ocean Law and Policy for having the vision to initiate this work, and to those who have labored to bring these volumes to fruition. They capture the wisdom of a generation—the generation that negotiated the 1982 Convention—some of whom, notably Ambassador Rosenne and Professor Louis Sohn, are no longer with us. It is said that each generation reinterprets its law and inevitably a new generation of commentators is arising who were not part of the UNCLOS III process and who have different views of the Convention and the processes that gave it form. However, this surely makes it more, rather than less, important to have such a comprehensive record of what took place." - David Freestone, The International Journal of Marine and Coastal Law

"...this series will undoubtedly rank as a classic for a very long time, a jewel in the diadem of historic works on the Law of the Sea." – M.I. Glassner, Journal of Maritime Law and Commerce