Editors: Jørgen S. Nielsen, Silvio Ferrari, Marie-Claire Foblets, Agata Nalborczyk, Mathias Rohe, and Prakash Shah
Annotated Legal Documents on Islam in Europe consist of an annotated collection of currently valid legal documents affecting the status of Islam and Muslims in Europe. By legal documents are meant the texts of legislation, including relevant secondary legislation, as well as significant court decisions. Each legal text will be preceded by an introduction describing the historical, political and legal circumstances of its adoption, plus a short paragraph summarising its content. The legal texts will be published in the original language while the annotations and supporting material will be in English. The focus of the collection is on the religious dimensions of being Muslim in Europe, i.e. on individuals' access to practise their religious obligations and on the ability to organise and manifest their religious life. The project will cover the 28 member states of the European Union (including Croatia), Norway and Switzerland plus the European Union and the European Court of Justice.

The online edition is published here. 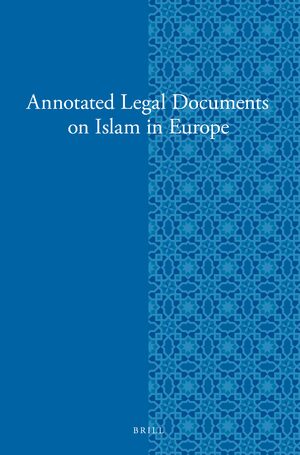 Contact sales
Academic and practising lawyers, legislators and government officials, as well as researchers working on Islam and more generally on religion and state in Europe.