Editors: Douglas Biggs, Sara Butler, Kelly DeVries, William Chester Jordan, Cynthia Neville, and Kathryn L. Reyerson
This series treats all aspects of European history, society, and culture from ca. 1100 to ca. 1600. Taking a pan-European approach, it provides a forum for scholarship on a range of topics prominent in the late medieval period, such as political, economic, and social history, as well as church history, intellectual history, urban history, and the history of culture and mentality.

The series publishes monographs, edited thematic collections, and source editions and translations, and welcomes interdisciplinary research and cross-cultural or comparative studies. It aims to promote geographical parity to reach a holistic view of the European late middle ages, while connecting the different strands of pan-Continental life during this vibrant period of history, and building a bridge between the medieval and early modern periods.

Authors are cordially invited to submit proposals and/or full manuscripts to either the series editor, Professor Douglas Biggs, or the Publisher at Brill, Dr Kate Hammond.

Brill is in full support of Open Access publishing and offers the option to publish your monograph, edited volume, or chapter in Open Access. Our Open Access services are fully compliant with funder requirements. We support Creative Commons licenses. For more information, please visit Brill Open or contact us at openacess@brill.com. 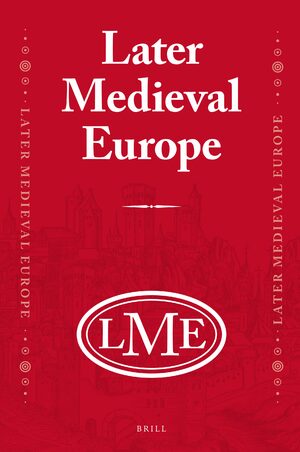 Contact sales
Douglas L Biggs, Ph.D. (1996) in History, University of Minnesota, is Associate Professor of History at University of Nebraska – Kearney. He has published extensively on late medieval English political and military history including co-editing, Henry IV: The Establishment of the Regime, 1399-1406 (Woodbridge, 2003).

Sara M. Butler, Ph.D (2001), Dalhousine University, is the King George III Professor in British History at The Ohio State University. She is a social historian of the law who has published books and articles on the subjects of marital violence, divorce, suicide, abortion, anti-clericalism, and medical malpractice. Her most recent book is Forensic Medicine and Death Investigation in Later Medieval Europe (Routledge, 2015).

Kelly DeVries, Ph.D. (1987) in Medieval Studies, Centre for Medieval Studies, University of Toronto, is Professor in History at Loyola College in Maryland. He is the author of Joan of Arc: A Military History (Sutton, 1999), The Norwegian Invasion of England in 1066 (The Boydell Press, 1999), Infantry Warfare in the Early Fourteenth Century: Discipline, Tactics, and Technology (The Boydell Press, 1996), and Medieval Military Technology (Broadview Press, 1992), and numerous articles on medieval military history and military technology.

William Chester Jordan is Dayton-Stockton Professor of History at Princeton University, where he teaches medieval history. His books include From Servitude to Freedom: Manumission in the Sénonais in the Thirteenth Century (UPP, 1986); Women and Credit in Pre-Industrial and Developing Societies (UPP, 1993, Japanese translation 2004); The Great Famine: Northern Europe in the Early Fourteenth Century (PUP, 1996), the winner of the Haskins Medal of the Medieval Academy of America; Europe in the High Middle Ages (Penguin, 2001), and most recently Unceasing Strife, Unending Fear: Jacques de Thérines and the Freedom of the Church in the Age of the Last Capetians (PUP, 2005). Professor Jordan has also edited several encyclopedias for elementary school children, high school students, and scholars.

Cynthia Neville holds the George Munro Chair of History and Political Economy at Dalhousie University in Halifax, Nova Scotia. She has published extensively on various aspects of the legal and social history of the Anglo-Scottish border lands in the period 1200-1500 and, more recently on the subject of Gaelic lordship in medieval Scotland. She is the author of numerous article-length studies of the impact of Anglo-Norman and European ideas on the culture of the Gaelic nobility of Scotland in the twelfth and thirteenth centuries and also published a book on this topic, entitled Native Lordship in Medieval Scotland: The Earldoms of Strathearn and Lennox, c.1140-1365 (Four Courts Press, 2005). She is currently at work on a book that further examines aspects of the legal, social and cultural history of Scottish Gaeldom in the twelfth and thirteenth centuries.

Kathryn L. Reyerson, Ph.D. (1974) in Medieval Studies, Yale University, is Professor of History at the University of Minnesota. She has published extensively on medieval social and economic history, particularly of the French Mediterranean, including The Art of the Deal. Intermediaries of Trade in Medieval Montpellier (Brill, 2002) and Jacques Coeur. Entrepreneur and King's Bursar (Pearson Longman, 2004).