Editors: Christoph Lüthy and Paul J.J.M. Bakker
Medieval and Early Modern Philosophy and Science is a book series to be dedicated totally to the investigation of scientific thought between 1200 and 1700, the period that saw the birth of modern scientific method and the origins of the scientific world view. It covers not only the Aristotelian paradigm of scholastic natural philosophy, but also rivalling Renaissance and seventeenth-century conceptions of physics.
A broad-based and distinguished panel of editors and international advisors has made a careful selection of the best new research emerging in a vibrant field examining this formative period of European scientific thought. Medieval and Early Modern Philosophy and Science contains contributions from an international cast of experienced and promising scholars and looks for the highest standards of scholarship in work that is thought-provoking, insightful, and at the forefront of contemporary discussion.
Its editorial stance is broad, aiming not only to embrace all the main aspects of study but to approach them from a variety of angles and to foster new methodological ideas. Medieval and Early Modern Philosophy and Science thus includes commented editions of crucial (medieval) texts, monographs of important thinkers, and diachronic analyses of particular themes. Accessible, attractively written articles and monographs will open up the latest trends and developments in the field to a wide range of teachers and students in further and higher education. 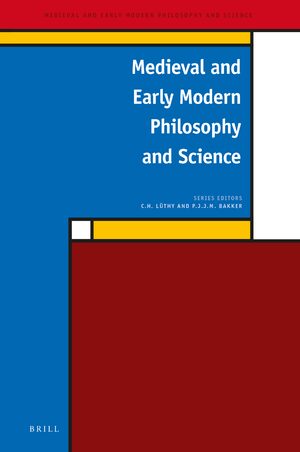