Series Editor: Stanley E. Porter
The name of “Paul” continues to stand at the heart of New Testament studies — as one of the first and most important interpreters and promulgators of Jesus Christ. Wherever he went as missionary, teacher, and preacher, or wherever his letters went in his stead, he rarely failed to cause a reaction. Paul continues to stand at the centre of theology and controversy, as scholars and laity alike continue to respond to him.

This series of essay collections is edited by eminent New Testament scholar Stanley Porter. It offers an important contribution to New Testament scholarship in general, and particularly to Pauline scholarship, by focusing upon major areas of study in order to throw new light on various aspects of the man and his work. The scholars involved bring various interpretative methods to their task, depending upon their own approaches and the nature of the topic itself. The volumes progress logically through several issues of continuing importance in Pauline studies. As a result, the series is both broad in scope and focused in approach.

Pauline Studies constitutes a basic resource for all those interested in Paul, including New Testament scholars, students of early Christianity, and ancient historians.

The series has published two volumes over the last 5 years. 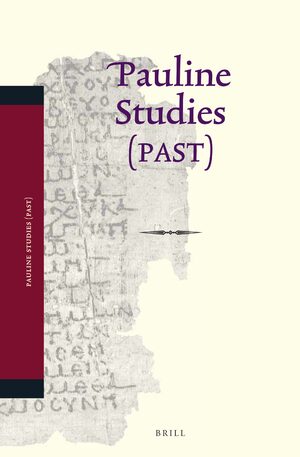 Contact sales
Stanley E. Porter, Ph.D. (1988) in Biblical Studies and Linguistics, the University of Sheffield, is President, Dean and Professor of New Testament at McMaster Divinity College, Hamilton, Ontario. He has published extensively in New Testament and related subjects. These include The Paul of Acts (1999) and the edited volume, with Jacqueline C.R. de Roo, The Concept of the Covenant in the Second Temple Period (Brill, 2003).